Tales of the Emerald Serpent 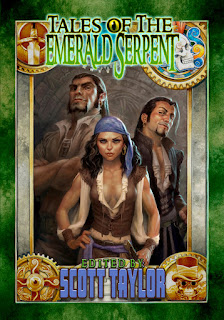 Tales of the Emerald Serpent (Ghosts of Taux)is a shared world anthology, very much in the tradition of Robert Lynn Asprin's  Thieves' World

series. It's the brainchild of Scott Taylor, a blogger and senior editor at Black Gate magazine. And it's a Kickstarter funded project, raising an impressive $13,418.

I confess to funding it out of curiosity to see just what was possible on Kickstarter, more an act of research than one of pleasure. However, I finished reading Tales of the Emerald Serpent this past Saturday, and my verdict is that I'm very impressed.

It's worth noting that I funded a second book project around the same time. That one achieved ten times its funding goal this past April, and two months past its estimated delivery goal, has yet to materialize.

By contrast, Tales of the Emerald Serpent made its funding on April 18th and had shipped out all copies of it's digital edition by June 26th. The delivery process was professional and efficient, with daily updates explaining which reward levels were being delivered when.

The book itself (and I've seen the physical edition though I speak here of the ebook edition) is a thing of beauty. Todd Lockwood's cover is absolutely gorgeous, and the cover is reproduced inside the ebook and - most importantly - at a decent resolution. The ebook also includes all the interior art, also at a high level of resolution, and has an embedded back cover. It's a good deal better packaged and presented than a good many books coming out of professional houses.

Also, note the medallions in the corners of the front cover. You'll see that three are in sepia tones, while the fourth, in the upper right corner, is in color. These medallions indicate what era of Scott's enormous history these stories occur in. This is similar to what the Star Wars books do, with the icons on the novels telling you where a story takes place in the Old Republic or the New Jedi Order, etc... It's a device that I've been kicking around in my own head for a while now, considering for a project I'm working on, and frankly I'm jealous Scott's beat me to it. 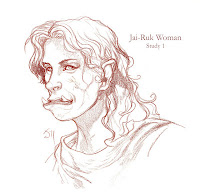 I would like it if there was some sort of introduction that placed this city in context. Perhaps some notes on how the idea came about (I've heard that it was the setting for a RPG campaign but nothing in the book confirms or denies this) or some background on the world in which the city of Taux resides. A glossary would also have been nice. More importantly, the book has a lot of invented races, the Aspara, the Jai-Ruk, the Kin. Wonderful pencil illustrations of these creatures were included in email updates sent out to the Kickstarter backers, but the book itself would really have been served by including them. I found myself logging on to Kickstarter throughout the reading experience to see who was what, and I imagine someone who wasn't a backer, and thus couldn't access the posted art, might have been even more confused. But given that few "traditionally published" anthologies even have interior art, Tales of the Emerald Serpent still comes out at the head of the pack.

Are there nitpicks? Sure. But speaking just in terms of the professionalism of the product, from its "customer service" to its presentation, I give this one an A-. And that's a very high grade.

Now on to the fiction...

The stories in Tales of the Emerald Serpent don't just share a location, they sometimes share characters. The various events described weave together in much the same way that the tales of Frank Miller's Sin City graphic novels do. They weave and wind through the Emerald Serpent tavern, the Silk Purse brothel, and the Raised Market, and events in one story are often alluded to in another. This adds a level of reality and credibility to the setting that makes me long for a detailed map of the city and another of the continent it's set on. What we do know of Taux we have to glean from the stories themselves. Taux is a sort of faux-Aztec or Mayan style city, whose original inhabitants suddenly vanished one day under mysterious, and presumably horrendous, circumstances. The city has been repopulated by immigrants from other cultures, though one wonders about the intelligence of anyone willing to live in a city where the stones whisper. To live in Taux is to convince yourself that whatever happened to them couldn't possibly happen to you. Having spent six years living above a fault line, I don't have any problem buying into this. Meanwhile, the way the book hints at something under the city and the very real possibility that something dire could be coming to a head is just delicious.

Perhaps not surprisingly, the best stories are by the most experienced contributors. Lynn Flewelling, Juliet E. McKenna, Martha Wells, and Julie Czerneda's tales are all excellent--Czerneda's in particular--while Harry Connolly's "The One Thing You Can Never Trust" is worth the price of the whole anthology by itself. His is the tale of Emil Lacosta, a merchant who deals in love potions (and whose best customer is the madame of the aforementioned Silk Purse), who is approached by a client with a very unusual request. I won't spoil it, but this was the story that made me sit up and take notice.

The big surprise for me was artist Todd Lockwood, who contributes the story "Between." Todd labored under the constraints of having to tie his tale directly into two other stories, but he does an admirable job. More importantly, his character of Torrent (the woman pictured center on the cover above) is marvelous--he can really write character--and I hope he gets to write about her again. Lockwood has long been regarded as one of the top illustrators of our genre, but I suspect, with his recent novel sale to DAW, that he will soon have a reputation as a writer as well.

There was only one story that I felt was below professional quality, though I won't say which one. Finally, Rob Mancebo's story suffers from essentially ending with a big "To Be Continued". It's a set up with no pay off, and I wish the book didn't end that way. But I liked eight out of nine stories in the volume, and that's an amazing average.