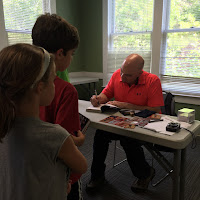 I am 4,687 words into the new project. I've reached Chapter Three, which is the chapter where our heroine discovers what she's going to have to do to survive this book. I'm very happy where things are going, although I haven't added very many new words today. That's because I'm still working out the specifics of what it is she's about to learn. When I know, she'll know!

But we had another book signing for this week's group of campers at the Thurber Center. This time I signed in the center, not the house, for the kids that I taught last Wednesday. And what a signing it was! The Thurber House bookstore has nearly sold through its entire stock of Frostborn (and the four remaining are spoken for), so they're going to have to reorder because I'm only halfway done with my Children's Writer-in-Residence stint. It was a great bunch of kids this week and I really enjoyed teaching them, as well as meeting some of the counselors. 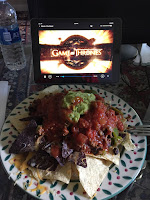 Afterwards, I came back here, where I managed to set off the fire alarm not once but twice in the preparation of tonight's nachos! I started heating oil in a pan, only to realize I had an unused green pepper I should slice. I didn't realize how fast the smoke would start. The whole apartment filled up and I had to open as many windows as could be opened. But the nachos were worth it! Totally!

It's a long weekend, with no one who works at Thurber House coming in again until Tuesday. There's a fireworks display at the river around 9pm tonight, but I think I'm going to skip. I want to spend a good chunk of time tonight writing and that would fall right in the middle.

And tomorrow I've got company coming!