City Without End: One Hell of a Novel 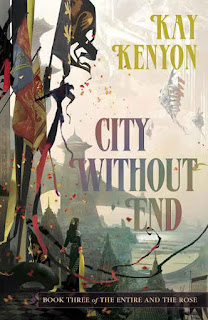 is to be admired and appreciated. It is to be enjoyed. City Without End is one hell of a novel. It is better than the A World Too Near,

which in turn was better than Bright of the Sky.

That would be saying something if the series did not start out strong. Since Bright of the Sky was a strong opening volume, it marks City Without End as something special. Truly, this is a series that demands to be read. Only, be sure to start at the beginning. You don’t want to miss a word.” -Fantasy Magazine, May 7, 2009

You see that there, "demands to be read" ? Now remember when SFRevu said, "This may well be the most ambitious epic science fiction series of the current decade." That's it folks. No more excuses.

Email ThisBlogThis!Share to TwitterShare to FacebookShare to Pinterest
Labels: A World Too Near, Bright of the Sky, City Without End, Kay Kenyon, reviews

QUOTE: "City Without End is one hell of a novel."

And do what I did - read them one after another, one per day, for 3 days. You won't be sorry.

That is assuming one reads as fast as you do! But read them back to back yes.

I will put the series on my summer reading list.

I will thank you for that.

And await your opinion.

Are you aware of any distribution troubles for "City Without End" in Canada? My local, most-excellent SF store got one copy in (which sold) and have had two more on back-order for months, and I haven't seen it anywhere else here in Toronto. The earlier books are on the shelves in a number of places, and Pyr's titles in general are well represented.

Hi House! I am not, and I appreciate you letting me. I'll ask our sales/marketing department to look into it. What is the name of the local store if you don't mind my asking?

The store that had a copy and is waiting for more is Bakka-Phoenix; I'm not sure who their distributor is, but like I said, they have most of Pyr's other titles, and are generally most excellent. But I also haven't seen it in any Chapters or Indigo bookstores (the major chain here in Canada) in the Greater Toronto Area. I can get it online, but I often like to give my business to local stores when I can...

Thanks House. I'll see what I can find out.

House, there was a third-party inventory snafu. Should be fixed now. Please let me know when Bakka-Phoenix gets the book if you can!

Damn, that's some good service. Thanks! :-) I'll keep my eyes open for it, and drop you a line when I get it.

Very glad we were able to figure it out. And yes, please let me know when you have it.

Bakka finally got a copy of "City Without End" in! I am a very happy camper today.

Oh thank god. I am sorry that took so long. I am very glad to know you have it.