This is a Banana

I got some wonderful fan mail today from a school in Delaware. One of the letters was written as comic book panels, so I thought it was only fair to reply to that one in kind. 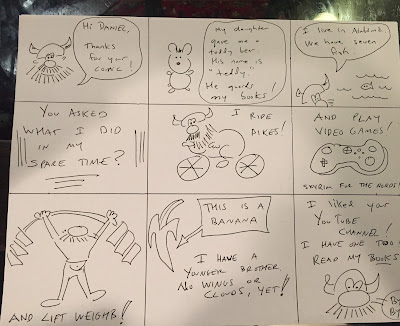 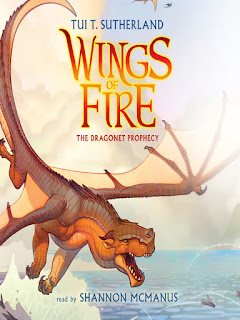 The Wings of Fire series has been on my radar for sometime, but I only got to The Dragonet Prophecy recently. From watching Tui T. Sutherland interact with her fans at the Decatur Book Festival, I was under the impression that the series skewed toward the lower end of the middle reader spectrum (she packed a room with very young fans), so I was pleasantly surprised by the sophistication of the world building and, frankly, the harshness of some of what the dragonets face in their quest. (Also, they eat people!) Sutherland has built a fully realized dragon-centric world, and thrust those dragons into a complex epic fantasy that will delight fans of any age.

To be clear, this is still a very good children's book, suitable for younger readers, but it has enough going on that older readers will be thrilled as well. I'm certainly a fan of Clay the Mudwing now and excited to see where his story is going to take him! 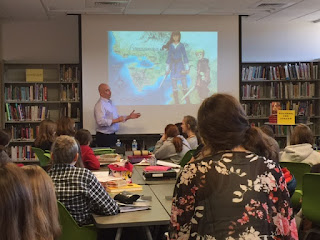 Last week, I visited Mountain Brook Junior High School, where I taught my ScripTips writing workshop to around 24 students from their writing club. This is a presentation where I use examples from contemporary films to teach plotting and outlining. It went over very well, though it is sad to me that the Matrix is now a classic film and not something junior high students know! 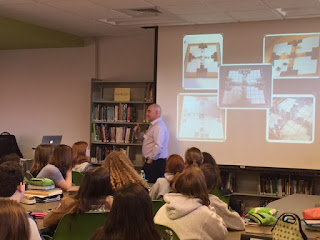 Today, I returned to Mountain Brook Junior High to give a Thrones & Bones presentation to about 60 students drawn from the writing club, the book club, the drama club, the art club, and the graphic novel club.


There were maybe 10-15 students from last week coming back and the rest new, but all with an interest in various things creative.

Both visits were a blast! This was largely due to very smart students who asked very good questions and made very clever observation. I was really impressed with all of them and had a great time interacting. And I'm sure I've met the next generation of writers.

And we sold out of Frostborn and Nightborn! So I'll be making a return visit in the next week or so to sign books for students who wanted books but couldn't get them. Thanks to Little Professor for facilitating book sales and to Librarian Susan Zana for hosting! 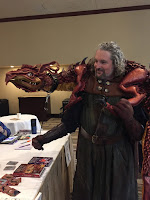 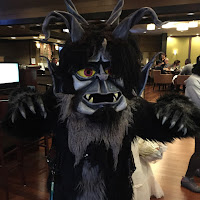 This coming weekend I am a guest of Mythicworlds 2016, to be held at the DoubleTree by Hilton Hotel Seattle Airport (18740 International Boulevard, Seattle, Washington). I'll be giving a Thrones & Bones presentation, demonstrating a game of Thrones & Bones, teaching a writing workshop, and appearing on world building and cover art panels with the other great guests! If you're in the Seattle area, come say hi and get a signed copy of Frostborn or Nightborn!

Here is my convention schedule:

3:00 – 4:00 Building Imaginary Worlds in Novels – Danika Dinsmore,
Anna Kyss, Nina K Hoffman, Lou Anders, Deborah Schneider
(Worlds of Fantasy)
World building is a vital aspect of speculative fiction and some authors have a special knack for it. Do they build their worlds before they put words on the page, as they are writing their stories, or a combination of the two? Are there special tricks, exercises, or skills for world-building? Listen and ask questions as our authors share their unique world-building experiences and read a short selection from their work.
SATURDAY
11:00 – 11:45 Inside the World of Thrones & Bones:
Story & Art – Lou Anders (Worlds of Fantasy)
Lou Anders introduces the experience that is Thrones & Bones: a book series, a board game, and, of course, the art. Lou’s viking-inspired creation is heavily illustrated, and Lou will be giving MythicWorlds a behind-the-scenes look at the art and writing of his adventure series. “Thrones & Bones” series will appeal to fans of Rick Riordan, Brandon Mull, and Lloyd Alexander.
12:00 – 12:45 Thrones & Bones Game Demonstration – Lou Anders (Worlds of Fantasy)
Lou Anders’ fantasy adventure series, “Thrones & Bones” takes its name from a board game that appears in the first book, “Frostborn.” Come learn about and play the actual “Thrones & Bones” game that appears in the novel. Loosely based on ancient Scandinavian board games, “Thrones & Bones” is a strategy game with a fantasy twist.

2:00 – 2:45 Storytelling with Images & Words – Lou Anders,
Melissa Marr, Cynthia Sheppard, A.M. Sartor, Deborah Schneider  (Worlds of Fantasy)
Book covers and illustrations are an essential part of marketing books but do authors and artists collaborate or work independently? On this panel we bring authors and artists together to discuss the process, and how images and words serve each other to dramatically tell stories in fantastic worlds.
SUNDAY
11:00 – 1:30 Author Book Signing / Reading Event – Open to the Public

In addition, I am also teaching a Writing Workshop:

Everyone who has tried their hand at writing has a folder full of openings that go nowhere. Many promising ideas bog down in their second half. In this audio-visual presentation, Lou Anders, author of the Thrones & Bones series from Penguin Random House and Hugo-award winning editor, discusses how a unique approach to structuring story in Hollywood screenplays can be repurposed to help writers struggling with outlining their novel. Using examples from film, Anders will demonstrate how character and structure work together to provide pace and reveal theme.

Learn simple techniques that have been demonstrated to help authors bring out the most in their story and maximize their emotional connection with their readers. Whether an author is a plotter or a panser, an understanding of these simple underlying principals in screenwriting can offer valuable insights for all novelists. Recommended pre-workshop viewing: Casablanca, The Dark Knight, The Avengers, Big Hero 6, Ant-Man, The Amazing Spider-Man (2), Mission Impossible: Ghost Protocol.