Today I'm a guest on the Dungeon Master's Block. I join host DM Neal for DM-Nastics 33: By Odin’s Beard!, a short DM-Nastics session in which we discuss a fictional clan inspired by my previous appearances on the podcast and then Neal and I put our heads together and come up with a new clan of our own.  This was a short, fun exercise in world-building. Check it out! 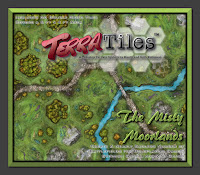 As I have spoken about here before, I'm currently running a Fate Core System role playing game for my son, my nephew, and some other boys their age that is set in the world of my Thrones & Bones series. We've been on break since the Christmas holidays but we're gearing up to start back. For our next campaign, I wanted to kick things up a notch. Although Fate doesn't require it, I'm going to introduce pawns--I'm using pawns from Paizo's Pathfinder Pawn's from the Beginner Box and the Pathfinder Pawns: Bestiary Box 1 set. And we're also going to start using some terrain.

Towards that end, I've just gotten TerraTiles: The Misty Moorlands from Rainn Studios. TerraTiles are large, nine inch, double-sided tiles that depict a variety of terrains. They are modular, and you place them together on your tabletop to create customizable terrain for role playing games and war games. I've been excited about Rainn Studios for a while, at least in part because they were founded by two brothers in my hometown. So far, they've produced a strategy board game and two TerraTiles sets, the aforementioned Misty Moorlands and a Coast and Rivers set. They are about to launch a third TerraTiles Kickstarter. It's going to feature three different types of terrain, including a snow-bound land, for which I'm obviously very excited.

Meanwhile, here I am unboxing my first set of TerraTiles. I was utterly thrilled with the set and encourage all tabletop gamers to check it out.

Frostborn just showed up on io9 again in a list of "16 Fun, Escapist Books To Get Your Mind off This Crazy Election Year." 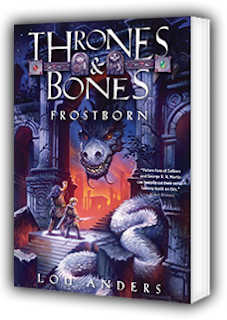 "OK so this is a middle-grade book, which means it’s technically for kids. But that doesn’t change the fact that it’s a ridiculously fun, super-exciting adventure. Karn is a nerdy kid whose dad expects him to run the family farm—but Karn just wants to play a complicated, fancy board game instead. And meanwhile, Thianna is a half-frost giant girl who gets bullied by all the other frost giants because she’s so tiny. (Only seven feet tall.) In other words, it’s about a gamer and a weird girl who have to team up to save the world. And it’s just non-stop fun."

Thrones & Bones in the Wild

The Spring 2016 Scholastic Book Fairs are in full swing. This week alone, I've received four photos of Frostborn sightings at schools in New York and Pennsylvania and two in North Carolina. I love seeing these! And I really love hearing the reports that they are selling out in these fair! Thanks for everyone who alerted me to the sightings! 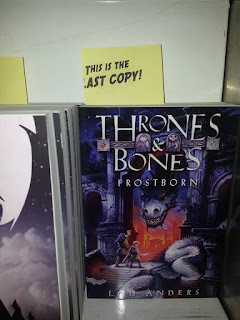 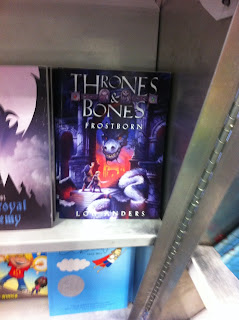 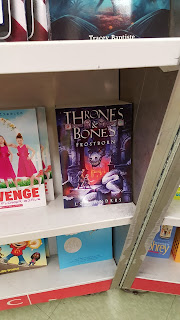 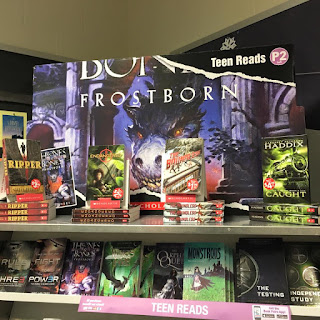