Fairwell to the 00's

2010 was a spectacular year. Pyr books, the science fiction and fantasy imprint for which I serve as Editorial Director, turned five years old in March, and we published our 100th title in October. We made a strong push into ebooks, and made our first significant forays into new-for-us subgenres, with several strong vampire, steampunk, and urban fantasy titles. We also acquired our first young adult titles (about which more later). We exhibited at DragonCon for the first time, to an overwhelming response, and our 2010 offerings are currently showing up on a multitude of Best of the Year lists. I was nominated for my fourth Hugo award for Best Editor Long Form as well as nominated for my third Chesley award for Best Art Director. I also edited two anthologies--Masked

, a sword and sorcery anthology co-edited with Jonathan Strahan for Eos books (currently itself showing up on several Best of the Year lists). I even managed to get some personal writing in, completing both a 10,000 word novelette and, more significantly, writing my first ever novel. Previously, I've written a handful of screenplays and teleplays (several of them optioned), a half dozen stage plays (all of them performed in Chicago in the early 90s), and over 500 pieces of professional journalism and a Making of 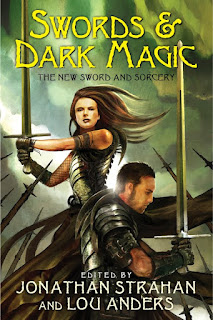 There's a review of Swords & Dark Magic: The New Sword and Sorcery

up at Sci-Fi-London today. It calls out stories by Steven Erikson, Glen Cook, KJ Parker, Garth Nix, Scott Lynch, and Joe Abercrombie, and says "go and buy the damned book, it's well worth it!" (I couldn't agree more). The review concludes, "...all in all an excellent anthology and one that is probably as well timed as it could possibly be given the recent upsurge in the genre. The writers here are amongst the best in the field and fans and newcomers alike will enjoy working their way through them, but it has to be said, there are a lot more writers out there that fit this mould and anthology number two should be just as exciting when it comes around. Lets hope it comes around soon."

Meanwhile, The Mad Hatters' Bookshelf & Book Review has posted their "Best Books of 2010 (That I Have Read) list and Swords & Dark Magic is their pick for Best Anthology of 2010. They describe the book as "a fairly complete view of where the genre of Swords &Sorcery has been and where it is going with a few truly exceptional stories, by many of my favorite authors."

Email ThisBlogThis!Share to TwitterShare to FacebookShare to Pinterest
Labels: Best of 2010, reviews, Swords and Dark Magic, Swords and Sorcery

Masked chosen as "Best Book of 2010" and gets Facebook Page.

as the best super-themed fiction of 2010. They write, "Masked, a collection of straight-up superhero stories was the best book of 2010. So sayeth SuperheroNovels.com. Each of the contributing authors fearlessly embraced the tropes of superhero fiction and successfully expanded the genre’s horizons. Hats off to the project’s editor and everyone involved. Hopefully we’ll see a second volume soon."

Meanwhile, I have created a dedicated Mask Facebook page, which you can conveniently "Like" in the box below.

Swords & Dark Magic: the most important sword-and-sorcery event from this year!

Over on Tor.com, John Klima opines that "2010 for Me Was Full of Swords and Sorcery." He goes through some of the players in the S&S field, and then says, "But for me, the most important sword-and-sorcery event from this year was Lou Anders and Jonahtan Strahan’s anthology Swords & Dark Magic 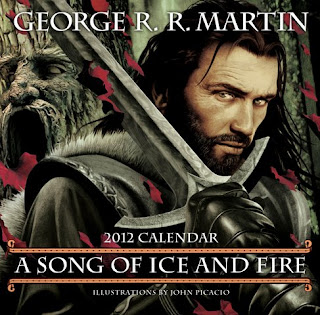 A Song of Ice and Fire Calendars. Ted Nasmith is the illustrator of 2011 and John Picacio of 2012. Both look amazing, but I'm particularly excited by the Picacio. George says, "This may not actually be the final cover, but it should give you a good taste of the spectacular work that John is doing. He tells me he's determined to make this calendar the best work he's ever done." Excited.

Hey, Why Not Try the Necronomicon?

My Thoughts on Google Books 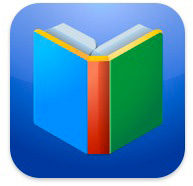 Google entered the ebook market heavily yesterday with the debut of the Google eBookstore, a cloud based ebook experience that promises that you can "use just about any device with an Internet connection to read over 3 million books." Books are stored in a Cloud and accessed when you download them to your device (where they are still accessible if your device goes off its wireless connection). Smartly, Google Books can be read on Android, iPhone/iPod/iPad Touch, the Nook and the Sony eReader, as well as on a desktop or laptop. They can't be read on the Kindle but are "open to the possibility" should Amazon allow that. For Android and Apple, apps are available to allow reading on the mobile devices. For Nook and Sony, epub files are downloaded in the Adobe Digital Editions format, and can be manually transferred to these devices.

I downloaded the iPad app yesterday afternoon (after several failed attempts in the morning, due either to high demand or - as the app wasn't even coming up in a search of the app store - possible shenanigans.) I discovered that "My Google eBooks" page comes loaded with several free selections - Alice's Adventures in Wonderland, Great Expectations, Pride and Prejudice (sans zombies). I played with the reader, and then downloaded a sample of Scott Lynch's The Lies of Locke Lamora (the author, along with George RR Martin, that I most want to see in the store of my preferred ebook reading app, iBooks).

As an app, Google Books  is perfunctory and serviceable, but the least versatile of all the major readers (Stanza, iBooks, Nook for iPad, Kobo, Kindle for iPad). You can change the font, font size, invert the background to white on black, and (nicely) adjust the "line height" (the space between sentences, what we call the "leading" - something the Nook for iPad also does). But there is no dictionary feature, and there doesn't appear to be any way to link to a website from text. There is a neat feature that allows you to switch between "flowing text" and "scanned text", the latter being an actual reproduction of the scanned pages. I imagine this could be useful when reading public domain works in which the OCR created errors in the text due to mistakes in scanning, but not one I personally am likely to get much use out of.

Opening the sample of The Lies of Locke Lamora, I was disappointed to see that the two maps at the beginning were too small to be legible. Google Books allows you to place your finger over a section of the page to enlarge the text/image, but doing so produced an image so grainy as to be even more indecipherable. So based on this experience, and the lack of the dictionary and other features, I personally wouldn't use the Google app as a primary eBook reader.

Perhaps more interesting is that apart from a "very small" number of titles, once you purchase a book from the Google eBookstore you can download it in PDF and ePub format. Stieg Larsson's The Girl with the Dragon Tattoo is marked "No download files included" for instance, as is its sequel, though The Girl Who Kicked the Hornet's Nest is not.

So first I got a free copy of Moby Dick from the Google eBookstore, then I downloaded it in ePub and added it manually to my iBooks' library in iTunes. The result - a book from Google successfully imported to my preferred reader, wherein I can use the dictionary and other features. Yay!

I then bought The Lies of Locke Lamora as a test. It does allow me to download the ePub file, but in Adobe Digital Editions format, which neither iBooks (as expected) nor Stanza (surprise!) could open. Sadly, I am now testing Google's customer service by seeing how easily I can request and receive a refund.

So my personal take: The Google eBookstore will be a great way to easily procure and read the "millions" of free titles already available from Google, but I personally will transfer such works to better readers, and I won't be purchasing any books from Google since their app fails to break my preferred app order of iBooks, Nook for iPad, Kindle for iPad, all of which are much sexier and versatile reading apps.

However, competition is always good. Already Amazon has announced that they will soon introduce Kindle for the web, enabling users to "to read full books in the browser" as well as allowing "any Website to become a bookstore offering Kindle books." It's extremely likely that the Google app will add features as it goes, and if it adds downloadable epub editions beyond the Adobe Digital Editions versions, I would use the bookstore for commercial purchases. As we all know, it's still very early days on ebooks, and their evolution is just accelerating.