I was on Rick Kleffel's wonderful Agony Column Pocast on March 11th, episode 846, talking about Pyr Books' Pyr and Dragons Contest, as well as Kay Kenyon's Prince of Storms

and Paul McAuley's Gardens of the Sun.  Here the direct link.

I came back on March 19th, episode 852, to talk about Pyr's first five years (we turned five this month!). And here's the direct link to that.

This coming weekend it's my privilege to be Editor Guest of Honor at MidSouthCon 28, held March 12th to 14th at the Whispering Woods Hotel and Conference Center in Olive Branch, MS. Kevin J Anderson and Rebecca Moesta are the co-Author Guests of Honor, and Gail Simone is the Comic Guest of Honor.  Sherrily Kenon is a Special Guest of Honor. Should be quite a convention.


Friday    5:00 PM    Killing Your Darlings    Working with an editor doesn't have to be murder; a second opinion can bring new life to your manuscript.

Friday    8:00 PM    How to Choose or Make Art for Book Covers  Painting or choosing artwork for book covers that drive sales -- what art directors look for.

Saturday    2:00 PM    The Story of Book Covers    From initial sketches to the finishing details, learn how a book cover is created.

Sunday    1:00 PM    Roundtable Discussion with Editors and Publishers    Everything you want to know (or some you don't).  Here's your chance to ask!

Get the Jump on the Future 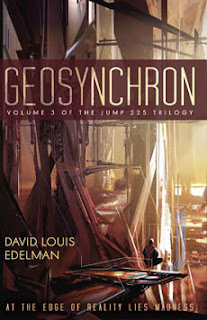 With the release of GEOSYNCHRON

, the third and final book in David Louis Edelman's landmark Jump 225 trilogy, the accolades for the series are pouring in. Look how many folks are saying this isn't just a good series, but a defining one:

The Dragon Page Cover to Cover:
“Probably some of the best sci-fi written this decade... Amazing stuff.

Grasping for the Wind:
“Edelman’s concluding novel, long in the making, is just amazing. ....If you read no other science fiction story this year, read the Jump 225 trilogy.”

Locus Magazine:
“This smart, idiosyncratic blend of cyberpunk, libertarian entrepreneurship, and social engineering will, I think, stand as a seminal work of 21st century SF.”

Fantasy Book Critic:
“Geosynchron achieves a rare feat for a trilogy-ending volume, namely it takes the series one level higher, beyond mundanity to true sense-of-wonder SF, so it finally plays on the level of the masters of modern SF like [Alistair] Reynolds and [Peter F.] Hamilton… An A+ and so far the best core-SF novel I’ve read in 2010.”

SFFWorld:
“Geosynchron is at the top of my best reads list - it has set the bar very high for anything else I’ll be reading this year. The Jump 225 trilogy is a must-read, an instant classic and a work of SF that will help define this first decade of the 21st century, and could cast a long shadow for many years to come.”

The Agony Column:
“This is what you want from science fiction. You want the vision of the writer to inform your vision of your life.”
I could go on. But really, do I need to?