Jonas De Ro recorded this video (speed up x3) to show how he went from a photo to a finished piece of concept art in 15 minutes. It's pretty inspiring to see: 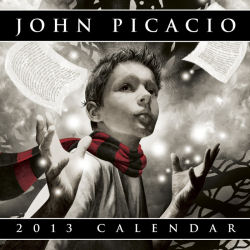 Hugo Award-winning and Chesley Award-winning artist John Picacio has just announced a Kickstarter project for a 2013 calendar featuring twelve of his fantastic illustrations. This is the first project from his new company, Lone Boy, and a very exciting one. The full-color 12” x 12” 2013 wall calendar collects twelve of John's personal favorite book cover artworks from his career to date. The calendar’s cover will be printed on 12 pt. premium paper stock, with a satin aqueous-coated finish, and the interior pages will be printed on 100# text. The interior image area will be a larger-than-normal 12” x 16”. Depending on your pledge, you could get your own copy of the calendar, signed archival prints, process drawings, your name printed on a full run of the calendars, and/or the opportunity to model for an upcoming published science fiction/fantasy artwork by the artist.

Here is John's pitch for the project:

And here is the calendar's artwork by month: 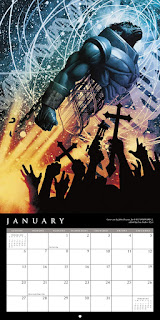 What are you waiting for? Pledge!

What’s in a World? A guest post from Gail Z. Martin

, will be out this coming January. Meanwhile, today Bowing to the Future is hosting a post on World Building by Gail as part of her annual Days of the Dead blog.