Episode 218 of Mur Lafferty's wonderful podcast, I Should Be Writing, is live. Mur starts with a discussion of "writing the other", and then she moves on to an interview she conducted at the recent World Science Fiction Convention with "a very tired, loopy, Lou Anders." We talk about Kermit the Frog, writing, how the Matrix sequels failed to follow in the direction laid down by Neo's final words in part I, V for Vendetta,

Last weekend was FenCon VIII/DeepSouthCon 49, a magnificent convention held in the Crowne Plaza Hotel in North Dallas/Addison, Texas from September 23-25. I was privileged to be a special guest of the convention, as I was teaching my very first Writers' Workshop.

The Writers' Workshop kicked off Thursday the 22nd, and included three 3-hour sessions of critics and two presentations, across four days. The focus I had chosen was on "creating novel openings," essentially talking about whether, as an editor viewing a submission, a student's first chapter would have me reading on to chapter two. I had 19 students, and the workshop was organized expertly by Debbie Waller. I found it exhausting but very, very fulfilling, a wonderful time, and I thank you all for having me. (And thank you Heidi Berthiaume for the Dark Truth Stout!)

As for the rest of the con - I was delighted that my good friends Stephan Martiniere, Madelynn Martiniere, Vincent Villafranca, and Michelle Villafranca were there, as well as new friends (and in the latter case new Pyr author) Tee Morris and Philippa Ballantine. And though I see them more here than I did there, it was also great to hang with Julie and Steve from my local book club!

Friday after the workshop was the guest of honor lunch at El Fenix, where I got to meet Gail Carriger, who was wonderful. Later that evening Bradley Denton did a magnificent job with Opening Ceremonies, running it Late Night With David Letterman style, right down to having a band and a couch. And musical guest Joe Bethancourt has made me a serious banjo fan!


Vincent is a tremendous sculpture and the pieces he had in the art show were amazing. I'm in love with the Ghoul Gun, but one of the most amazing things I saw was the working "Monkey Canon" that he brought in the trunk of his car to show me. We dragged Baen books publisher (and weapons aficionado) Toni Weisskopf out to see it to, and she asked many intelligent questions I wouldn't begin to know how to ask while I practiced shooting imaginary armies of intelligent gorillas.

Saturday night, Stephan & Madelynn Martiniere, Vincent and Michelle Villafranca, workshop participant Lucien Rene Nanton, and I headed out to the Queen of Sheba for Ethiopian food. It's a fun experience, if not my favorite cuisine (the spongy bread is very tasty but tends to expand in the stomach), but the company was delightful. This was followed by a private tasting of Dark Truth Stout in my very large suite, and then the DeepSouthCon 50 party, equally great.

Sunday I concluded the Writers' Workshop with a screenwriting presentation (the same one I gave in Austin at ArmdilloCon when I sat in on that workshop, now refined). I've been interested for a while now on how "the Hollywood screenplay formula" that I learned from my great guru Dan Decker

can be applied to novel writing. Then it was time for my only actual panel, "The Economics of Fantasy," and closing ceremonies. I had a final meal with two of my workshop students (you were all great), said my goodbyes, and headed home.

A huge thanks to Julie Barrett, Russ Miller, Tim Miller, Tim Morgan, Jimmy Simpson, Rhonda Eudaly (my wonderful Guest Liaison), Bobb Waller, Debbie Waller, and everyone who worked so hard to make this such an amazing weekend! You are a great bunch of people and FenCon is a great con!


Now, here's the Ghoul Gun! This thing SHOOTS GHOULS! I mean, the ghouls are the projectiles. You shoot them AT ghosts. Because--Doh!--what else do you shoot ghosts with? 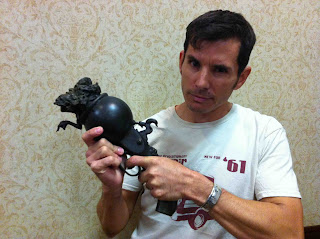 I Got You Babe

Thanks to John DeNardo for this link, David Bowie and Marianne Faithfull performing Sonny and Cher's "I Got You Babe."

At the recent World Science Fiction Convention in Reno, NV, I got to catch up with Shaun Farrell of the wonderful Adventures in Sci Fi Publishing podcast. An interview we conducted Saturday morning is now up, episode 137.

Shaun writes "We discuss Lou’s passion for great stories, his theater background, how to pitch to an editor, how NOT to pitch to an editor, BLACKDOG, by K. V. Johansen, the thrill of discovering new writers, the true purpose of form rejection letters, the tumultuous publishing industry, including changes at Barnes and Noble, and major publishers being lazy with their ebooks!"

Last weekend was Dragon*Con, one of the largest SF&F fantasy conventions going, if not the largest, with around 40,000 fans that gather in a host of hotels in downtown Atlanta every Labor Day weekend. I've attended the past three years in a row, and Dragon*Con has become a highlight of my year. What makes it such a rewarding show for me is a) the incredible access to readers and fans of all ages and b) the large numbers of Pyr authors and personnel on hand. This year we were joined by our authors James Enge, Clay & Susan Griffith, Erin Hoffman, Andrew P. Mayer, Ari Marmell, Mike Resnick, Jon Sprunk, and Sam Sykes, as well as my editorial assistant Rene Sears, VP of Marketing/Director of Publicity Jill Maxick, e-Initiative Coordinator Lynn Pasquale, and freelance copyeditor Gabrielle Harbowy.

I drove down with Rene on Thursday, and the two of us, together with Clay and Susan Griffith, began unpacking the 60 something boxes and assembling the Pyr booth. Putting up the wireframe booth and then assembling it is like a giant jigsaw puzzle and after having done this twice before, it's actually becoming fun. Lynn and Jill arrived a few hours later to help, and set about building the huge display of sampler books. Right after they finished, a director arrived to inform us that we'd built the stack outside the lines marked by white tape that delineated the confines of our space.

Fortunately, Andrew P. Mayer was on hand to suggest a method that allowed us to move the stack instead of having to start over. After that herculean effort, Sam Sykes arrived in time to join us for beers (hmmm) at my favorite Dragon*Con hangout, Max Lager's. What makes this show for me is friends. I love the work hard/play hard vibe, so after getting everything set up for Friday's opening, we had a *very* late night at Max's as our reward. Followed by the bar High Velocity in the Marriott.

And then the show started. Friday the Exhibit Hall opens at 1pm and goes until 7pm, and I had three panels afterwards, making it a racing start. We brought a huge number of the aforementioned free samplers to give out, double what we brought last year, but that didn't stop them being pretty much gone in under two days, same as last time. What was truly gratifying was the number of readers who remembered us from last year and were glad we were back. Equally gratifying was the way we all worked together to promote each others books, with truly above and beyond the call efforts on the part of Sam Sykes and Jon Sprunk.

Saturday was 10am to 7pm and no panels, though I did sneak off to record two back to back shows of the wonderful podcast Writing Excuses with Dan Wells, Mary Robinette Kowal, and Howard Taylor. I also gave an interview to George Holochwost of Mtv Geek!. The result is his very generous article "A Visit with Pyr Books." Then it was back to Max's Larger and (subsequently) High Velocity.

Sunday was another 10 to 7, punctuated by the Pyr Presents Panel, an almost-two-hour panel event where yours truly and all nine of our authors take the stage to talk about forthcoming books along with a PowerPoint presentation of fantastic cover art.  Then later that evening, Clay & Susan had a private event courtesy of James Marsters (of Buffy fame) who was reading selections from their novel, The Greyfriar (Vampire Empire, Book 1)

. James is reading for the forthcoming audiobook, a fact that has created quite a bit of buzz.

I had a 10pm sword & sorcery themed panel "Blood & Iron" that evening, which was seriously fun despite cutting into serious reward time.

Monday was 10am to 5pm, but since some of my wonderful publishing family had left, those that remained felt their loss. Rene, Gabrielle, Andrew, and Clay & Susan remained. At 5pm, we were joined by my friends David Alastair Hayden, Cooper Chun, and Will Cockrell, and this crack team, armed with last year's experience, had the booth broken and packed in 59 minutes flat.

But a tropical storm (!) kept us from driving home, so David, Cooper, Will, Clay & I headed out for a final night of dinner and drinks, and then Clay & Susan kindly volunteered their floor. Early Tuesday morning I woke and drove home, and one of the most incredible weekends of my year came to a close.

Dragon*Con marked the third of three straight weeks of conventions for me, after WorldCon (Reno) and ArmadilloCon (Austin). It's been incredible to spend almost a month in the company of writers and artists and fans, fantastic to have had two extra weeks of post-Hugo glow to spend in the company of people who actually care about such things, and tremendous to have such a sustained period in this science fiction and fantasy Brigadoon.