I'm going to be in San Antonio in October, making three school visits and appearing at the Alamo City Comic Con as part of the brand new Young Adventurers writing workshop and programming track. It's going to be an exciting week, and one reason for that is that I'll also be making an appearance at the Alamo City Reading Council's monthly get together. The event is to be held Tuesday, October 25th, 2016 4:30 PM - 6 :00 PM. The event is free to all Alamo Literary Council members and full time students and you can register here. 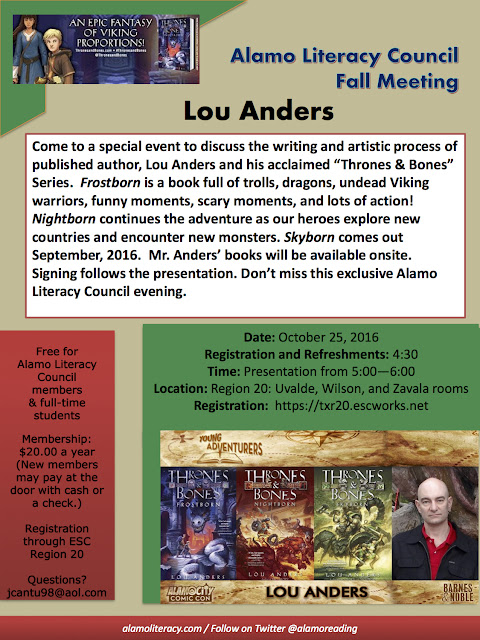 This coming Labor Day weekend, I'll be appearing at Dragon Con on Saturday and Sunday. Here's my programming schedule as well as news of a special signing at The Missing Volume on Sunday. Hope to see you there!

Sunday, Sept 4, 10:00 PM
The Writing Process
Location: Hyatt Embassy AB
We know writers write. But how do they write? What process do they follow to generate wonderful stories we love to read? Our panelists discuss this and maybe give us a few surprises. (Lou Anders, Eric Flint, Lois H. Gresh, John G. Hartness, Dayna L. Linton, Lee Martindale)

A History of the Continent of Katernia

This is not a book trailer. This is something different.

All three novels in my Thrones & Bones series contain substantial appendices. In these, you will find rules for board games from my world, timelines, song lyrics, even a recipe.

In Nightborn, there is a detailed history titled "A History of the Continent of Katernia." When Listening Library was recording the audiobook of Nightborn, they very kindly and thoughtfully had our amazing narrator, Fabio Tassone, record this as well, just so we could do something fun with it later.

So here is that "something fun." Please understand that while we have copious illustrations of the characters and creatures in the Thrones & Bones series, artwork that can be repurposed in service of events that occurred hundreds or thousands of years before the time of my novels is in short supply. Still, Fabio Tassone's audio narration is masterful, and there are several very cool images accompanying it. Also note that some of the information herein could be considered "slightly spoiler-y" for the novel Nightborn. With those caveats, here we go: 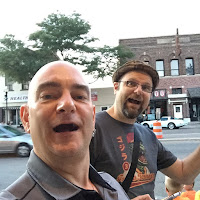 This past Saturday, July 30th, it was my privilege to be a guest at the The 22nd Annual Norfolk Public Library Literature Festival. The event was held at the Lifelong Learning Center and featured three current nominees for the 2017 Golden Sower Award, myself,  Jill Esbaum (Teeny Tiny Toady), and Sally M. Walker (Winnie: The True Story of the Bear Who Inspired Winnie-the-Pooh), along with Alan Gratz (Prisoner B-3087), a 2015 Golden Sower Award winner.

All four of us flew into Omaha on Friday, where the wonderful Karen Drevo, Youth Services Librarian and general festival head honcho, picked us up and drove us the two and a half hours north to the city of Norfolk. After checking in to our hotels, we went out for a great dinner along with more library staff and volunteers. 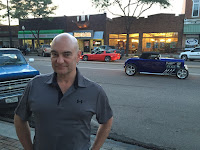 After dinner, Alan Gratz and I got a ride to downtown Norfolk. As it turned out, it was "Cruise Night," a couple-times-a-year event where classic cars, muscle cars, and, well, just car-cars drive up and down the main street and the whole town turns out on lawn chairs to sit and watch the parade. There was live music and food trucks, although we were both stuffed from dinner so we didn't sample. After walking up and down the strip several times, we ducked into Black Cow Fat Pig, where I sampled a local stout. Then Alan and I walked the 45 minutes back to our hotel, catching several Pokemon along the way! 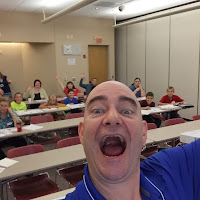 Then it was Saturday and time for the festival! Things kicked off at 9am with attendees choosing between five offerings, writing workshops taught by the four guests or a preview of all the Golden Sower nominated works. I taught a permutation of the writing workshop I perfected in the trenches in my recent sojourn in Columbus. The room was full and the students were great. Special shout out to two particular fans, the brothers who came in early and talked Pokemon Go with us! 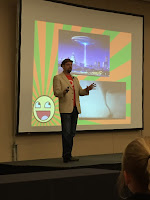 After the morning, the rest of the festival was only one programming item at a time. This was solo presentations from each of us, two before lunch and two after. I don't often get to listen to
my fellow authors talk, so I was thrilled to be able to be in the audience for all three of them. And Alan's "Choose Your Own Adventure" style presentation was inspired! (We got killed by a tornado.)

The day ended with a huge signing where we all autographed for long lines of fans. 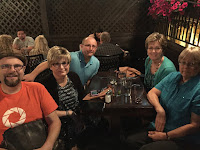 Then we drove to Omaha --thanks Sam for the ride; hope we didn't drive you crazy with authory-businessy talk! Finally, our weekend ended with dinner on the upstairs outdoor patio of the Upstream Brewing Company.

A huge thank you to Karen Drevo, all of her staff and volunteers, my fellow authors, and all the enthusiastic readers who make the Norfolk Public Library Literature Festival a great time for all! I'll have to get nominated for another Golden Sower one day so I can come back!