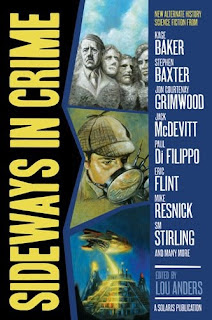 The first review of my forthcoming anthology, Sideways In Crime,

appeared in my mailbox today, in the March 31st issue of Publishers Weekly. And it's a great one for starting this book off right:

"Fans of alternate history and crime fiction should enjoy this high-quality anthology from noted editor Anders (Outside the Box). The tone of the 15 contributions ranges from the tongue-in-cheek (Mike Resnick and Eric Flint's 'Conspiracies: A Very Condensed 937-Page Novel,' featuring an alien abduction of Jimmy Hoffa) to serious political theory (Stephen Baxter's 'Fate and the Fire-lance,' a whodunit set in a 20th-century Roman Empire). Jon Courtenay Grimwood weighs in with 'Chicago,' a twisty tale in which technological advances allow the narrator to plot a perfect murder. The standouts are S.M. Stirling's 'A Murder in Eddsford,' which could be at home in a collection of English cozies, and Mary Rosenblum's 'Sacrifice,' which marries a vision of advanced Aztec civilization to an intricate plot."

I should add that the book review is given it's own sidebar, with the cover, paired with Cecilia Tan's

and under the title "Genre-Benders: Editors blend speculative fiction with other genres to create anthologies with broad appeal." Sweet! Congratulations, Cecilia - and to all of our marvelous contributors!

I'm definitely anticipating this one...

Thank you. I think I had the most fun of all seven of my anthologies on this one, so I hope it's received well. So far, so good...