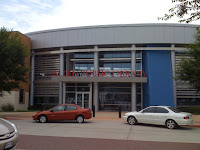 Last friday, the 14th, it was my great privilege to be a guest speaker at the NETLS Collection Development Symposium, held in the Allen Public Library in Allen, Texas (outside Dallas). The conference was organized by Steve Seale, Continuing Education Consultant for NETLS (pictured left below), which stands for North Eastern Texas Library Systems. I spoke to the Central Texas Library Systems two years ago, giving a speech on collection 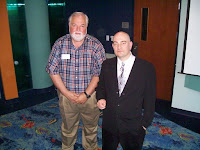 building focused exclusively on science fiction. They recommended me to Steve (thanks!) and this time, I gave that same speech (updated) along with a new speech on fantasy collections. I gave each twice, so four hours of talking, which I'm told equates to 32 hours of "normal life" in terms of the adrenaline bursts, energy consumption, etc... Whatever the equation, it was exhausting but very fulfilling. 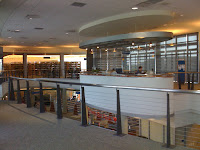 nest, an hour not being enough time to eat and come back, but the other three sessions were standing room only. They had to bring extra chairs in twice, and yet still people were standing, sitting on tables, etc... More importantly, the audience - comprised of librarians from all over the NETLS region, were very engaged and enthusiastic. (Plus they laughed at my jokes. For which I am grateful.)

My favorite comments were:

1. I plan to throw out everything, get rid of all the moldy old books, and rebuild our collection from scratch based on your recommendations.
2. I never understood fantasy before but you put it all in a context that makes sense to me.
3. I was never much of a fantasy reader before, but now I plan to start. 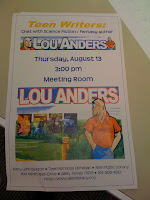 Another highlight getting to speech to the Allen Public Library Young Writers Group the day before. Actually members of several writing groups, as they have one group for ages 13 to 18 and another of upper teens to early twenties. There were four kids from the group (two boys, two girls) spread across probably 5 or 6 years in age. All were very knowledgeable fantasy readers, and enthusiastic, lifelong writers. Talking with them was really fun and informative, and I hope I gave as good as I got. 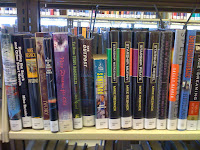 I was also very impressed with the library itself, which looks shiny and new and somewhat SF-y, with all it's curving balconies and glassed-in, circular "quiet rooms." A really nice facility. I was impressed to see they shelved SF&F in with "adult fiction" and that they already had a very nice selection of Pyr titles, including books by Abercrombie, Chadbourn, MacKay, McDonald, Meaney, Resnick, and others. And, as an avid lover of Mexican food, eating TexMex two meals and the anti-TexMex Urban Taco for a third, the food was really wonderful too.

I learned Texas is divided into 10 different library systems readings, too, so... 2 down, 8 to go!

Number one is impressive (or scary) depending on how you view it. I think it's great that you're helping people "get" sci-fi/fantasy.

Well, I think they meant their collection was very dated, old, and needed an overhaul. And what I presented was a good mix of classic and new. I structured the talk as the back and forth between swords & sorcery and epic fantasy, with the conclusion that they are merging now in the "new, gritty fantasy" that is so interesting.

In my years of exploring the galaxy of workshop presenters, my greatest discovery is Luminous Lou. I and everyone else who enjoyed his presentations at the library symposium look forward to when we cross paths again.

Very kind of you to say, and now I have a new nickname.