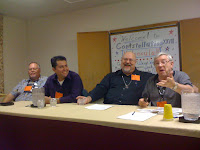 I say small-but-sincere because the convention drew maybe 250 people, which seemed large in comparison to when I was there two years ago, and is small enough to fit in a Holiday Inn Express with neither restaurant nor (gasp!) bar. However, what is lacking in size is made up for in enthusiasm and friendliness. 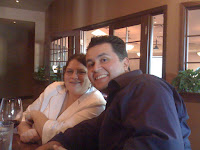 Furthermore, the con is also something of a well-kept secret for Baen book fans, with authors David Drake, Eric Flint, Sarah Hoyt, Travis S. Taylor and Baen-publisher Toni Weisskopf all in attendance. This alone, plus a few others like Tor's William Drinkard, made it a fairly large literary con guest-wise. And it was off to a great start when the very-generous Toni took fourteen of us out to lunch on the first day to Huntsville's Grill29, which is the best meal I've ever eaten in that town. 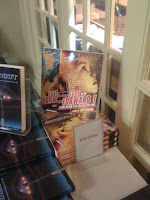 As to the con proper: Panels were standing room only - and standing room means about 60 people, which is pretty good by standards of even larger cons - and the dealers room, though small, surprised me by having a representative from Barnes & Noble with a large display of guests' books on hand. Day one, a guy called "Squid" (former Navy before you ask) saw Picacio's painting for World's End in the art show and said, "That better be in the dealers' room." It wasn't, but John quickly suggested we ask B&N to see if they could bring it in the next day. Rebecca from B&N brought in the whole trilogy, and, at our request, quite a few more Pyr books. All sold out pretty much immediately on being set out. (They already had Fast Forward 1 and Fast Forward 2 in good supply - but they came back over the weekend with Blood of Ambrose, The Quiet War, and all four Quantum Gravity books. ) So, a huge thanks to Rebecca! 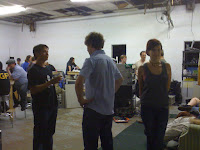 And filed under pleasant surprise: Saturday, I got a text message from my friend Madelynn Martiniere, asking if I could drive up to Huntsville to meet her at Makers Local 256, a Hacker Space. Since I was already in town (unbeknownst to her), Picacio and I got the very generous Steve Sloan to drive us over Saturday night. Now, if you don't know what a Hacker Space is, Google it. I'm utterly fascinated, and I wish such a place existed when I was a teen, because watching someone disassemble a pinball machine while someone else pumped Frankenstein volts through a Jacob's Ladder sure beats the hell out of hanging around in the parking lot of Mr Gatti's Pizza trying to get college kids to buy us beer. 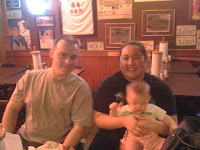 Now a con really is the people you hang with, isn't it? And this one was tremendous for being able to see my old friends (and new parents!) Tom & Pam Kanik, as well as to get to have a long conversation with Shane and Rachel Ivey (of Arc Dream Publishing). It was also great to see three members of the Inner Worlds Sci-Fi/Fantasy Reading and Discussion Group--the same three I saw recently at Dragon*Con--as well as to see the friends from previous Con*Stellations.

So... moved a ton of Pyr books in the dealers room, got to visit an amazing new cultural/social phenomenon, caught up with old friends, made new friends, saw Picacio move 12 of the 14 paintings he had for sale in the art show (many at auction!), talked up the book line to enthusiastic readers, and ate entirely too well. I'd call that a very successful con. Hopefully, I'll be able to attend next year. Now, if only we could get someone to build a bar in the lobby...

The absence of a bar was more than made up for by the very-well stocked room parties, the Free Bar Suite with some very good red ale and stout homebrew (along with storebought ales and liquors), and the con suite stocking beer of your choice on request for the guests. I don't think there was any less booze, it was just free.

Oh, well, in that case. I approve!

Hmmm, no bar? What a shame.

See previous comment. Of course, if I get enough people to consider this con that they have to move to a bigger venue...