Last weekend I attended Renovation, the 2011 World Science Fiction Convention. I had a good time.

Renovation, was held in Reno, Nevada, August 17-21, 2011, at the Reno-Sparks Convention Center (RSCC). The Atlantis Casino Resort served as the headquarters/party hotel, though I stayed .6 miles away at the Peppermill Hotel Casino. 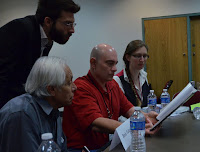 I was very impressed with the con organizers - particularly with their efforts to ramp up the Art Show and Art programming over recent years. For the first time, WorldCon took advantage of it's artist guest of honor (in this case the magnificent Boris Vallejo) and utilized the art in signage all over the convention center. Thursday was a designated "Art Night" and the overall quality of the art program - which included life drawing sessions and portfolio reviews - was tremendous. It was a personal honor to sit and review portfolios alongside Boris, incidentally. Something up there with swinging Moorcock's Stormbringer prototype around in a Texas parking lot a few years ago. And I was thrilled to see my friend Jon Schindehette take home the Chesley Award for Best Art Director. Especially since this was his first WorldCon (or possibly first in a very long while).

The hotel layout, or rather the hotel's nature, made for a difficult after hours. While all the staff were helpful and friendly, casinos don't make for the best con experiences. I told each of my ten meetings we'd get together "in the bar", assuming that, as always, there would be one bar that emerged as "the" bar where everyone hung. My first meeting emailed me day of the con to say "Lou, there's not one bar. There's ten." And we discovered that most of them closed early! Given the perfusion of small bars, and the distance between the two hotels, what resulted was a convention of small groups spread out between two locations, and I was sad not to even run into some folks, like my good friend TC McCarthy, who was there to promote his book Germline, but who I never saw. Others, like Heaven's Shadow

co-author Michael Cassutt,  I saw briefly once and then not again. Or Howard Taylor (pictures above right at the autographing) who I talked to, but not nearly as much as I'd like to have.

But for everyone I missed, there were a dozen wonderful people I did get to see. This WorldCon really stood out for me overall as being about the quality of the conversations I had, whether it was a meeting with Tim Holman (Orbit), late night drinks with Irene Gallo, Gregory Manchess, and David Palumbo, or even later drinks with Saladin Ahmed, Pablo Defendini, Rajan Khanna,  and Charlie Jane Anders, or the conversations that occurred on panels. The whole event was one long, fun, stimulating conversation with friends. And such great panels this year too!

Though I really enjoyed my own panels, especially "Cover Art in the Age of e-Books," " The Comeback Genre: Sword & Sorcery," and "Book Cover Design: Using Cover Elements to their Best Advantage," by far the best programming I attended myself was The Unincorporated Man

's Eytan Kollin's presentation on weaponry. I've seen weapon demonstration's before, but Eytan's program was specifically designed to improve the quality of combat writing in fantasy novelists by abusing them of certain common misconceptions and cluing them into a few relevant but little known facts. Eytan was a good teacher, mixing humor and live demonstrations into his discussions of hacking and slashing. I had to leave at the halfway mark to be interviewed by my good friend Shaun Farrell of Adventures in SciFi Publishing, so I hope I get to hear the full presentation some day.

for breakfast was another highlight of my trip. She and I were jurors for the Science Fiction Museum's Science Fiction Hall of Fame recently and felt we'd found kindred spirits there, so it was great to meet in the flesh. Friday's KaffeeKlatsch was also top knotch - those kind of intimate conversations with fans/readers/hopeful writers are becoming my favorite things to do at cons. Dinner with John & Traci Picacio, Paul Cornell, Bill Willingham

was another highlight. Any any chance to see Ian McDonald is worth it, natch. And Ian in a kilt?

This pretty much means that, despite problems with the venue, or missing seeing some friends, or whatever, Renovation has to go down in my book as the BEST. WORLDCON. EVAH.

Thank you all, every one of you, I had a marvelous time.

Thanks for doing the KaffeeKlatsch--once I discovered them they were my favorite part of the con. I enjoyed chatting with you, and I was happy to hear about Pyr's quality ebook process.

Sounds like a great time, and some good exercise if there was a lot of walking. The only real complaints I have heard were about the shuttle service and the cigarette smoke.

I would have loved to have attended the ebook cover panel! I hope they do something like that at WFC.

John Picacio made a vital point on his blog: "Vital point: "Whomever was responsible for doing the big banners in the Exhibit Hall -- major applause to you. I'm thinking Patty Wells and Colin Harris were involved once again. Having the Artist Guest of Honor's artwork used in that way rallies the entire convention to feel like Worldcon 'owns' that giant space. It raises spirits and shrinks the scale of an otherwise cavernous hall space. It makes art central to the Worldcon conversation, and it celebrates Boris Vallejo (in this case) the way he deserves to be celebrated as Artist GoH. It was a great move. Well done, Renovation."