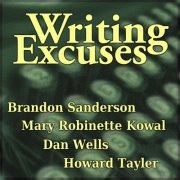 I'm a guest on episode 6:18 of the marvelous Writing Excuses podcast, talking about "the Hollywood Formula." They write of this episode:

Lou Anders, Hugo-winning editorial director from Pyr books, joins Mary, Dan, and Howard at Dragon*Con for a discussion of the Hollywood Formula. Lou shared this with Mary originally, and she used it to tighten up some of her work. It’s useful enough that we decided to invite Lou onto the ‘cast to share it with everybody else, too.

The formula centers around three characters – the protagonist, the antagonist, and the relationship character. Lou explains how these terms have, in this formula, different meanings than we might be accustomed to.

Among the things that we learn: The Dark Knight has an antagonist none of us could guess, Die Hard and Stargate are third-act movies, and Howard is criminally ignorant of classic cinema.

Great episode! I agree with Howard that it was one of the best ever. And I'm quite proud of myself, because as soon as you asked which character was the antagonist in The Dark Knight, I turned to my wife and said, "That's easy. Two Face." Any chance of you publishing an essay or book on this subject?

Brilliant, as usual. This is definitely one of my favorite Writing Excuses episodes. Thanks, Lou!

Thank you all. I've given this talk three times, all within the last two months. No write-up yet, though the positive reaction has set my wheels spinning.

Oh, I love Writing Excuses. I'll be sure to listen!

Great episode, I really enjoyed your talk on "the Hollywood formula"! I had never heard that sort of take before; it certainly sets my mind brainstorming new story ideas. As others have said, a write-up would be awesome.