Today's blog post is a big shout out to my friend Michael Colbert, whose comic book Crazy Mary is in the top paid books list in the Comics Plus app. Artwork is by J.K. Woodward (of CSI:NY, Fallen Angel, and Star Trek TNG/Doctor Who: Assimilation2), William Blankmanship, and Ryan Sargent. Here's the description: 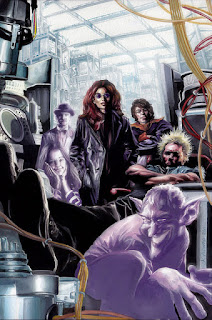 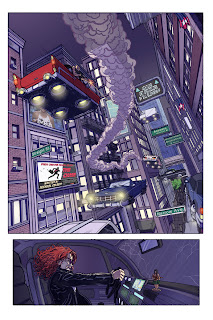 Don’t call her crazy to her face. Several years ago Mary was a professional soldier who volunteered for an upgrade program dubbed “Project Dragonfly”. The project upgraded the subjects with enhanced strength, speed and combat ability.

It didn’t go well for Mary.

Shortly after the upgrades Mary started seeing things… insane things. A world of melting walls and living fire, vortexes of thought and colored radio waves, sentient metaphors and beings that existed in an invisible layer of reality. She could communicate with these beings. She made deals with some of them.

Or she had simply gone insane.

Either way she was useless to the project and the military so she was cut loose and vanished shortly thereafter.

A few years later she re-emerged in the New York area of Megalopolis as a “freelancer” specializing in bounty hunting and search and rescue. Her upgrades give her an advantage in competing against other freelancers, Lawcom and her targets… most of the time. She can still see the weird layer of reality and her trinity of supernatural advisers helps … most of the time.

Or she could just be crazy and very lucky.

Or a bit of both.


To date there are four issues of Crazy Mary, and you can read the 0 issue for free here.