The first review of Frostborn (Thrones and Bones).

The review is from Kirkus and I couldn't be happier. 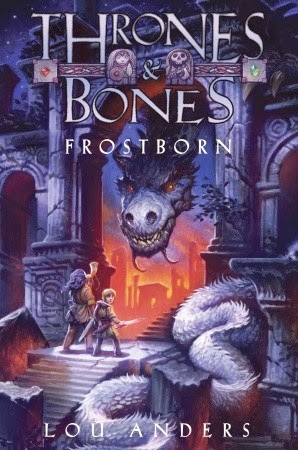 An obsessive gamer and a sassy half-giant affirm that power lies in being underestimated.

As the heir apparent to a powerful farm in Norrøngard (think a fictional Norway), 12-year-old Karn is expected to comprehend bartering techniques (six ewes + six lambs = one cow). His predilection for Thrones and Bones (a traditional Norrønir board game) and disdain for a bucolic existence don’t invite any confidence from his father. Thianna is a 12-year-old half-giant and half-human (by way of her deceased mother). At 7 feet tall, she’s considered diminutive by giant standards and would “cut her human half out in an instant if she could.” When their fathers meet for several days of trading goods, Thianna and Karn strike up an unexpected friendship. Their need for an alliance is accelerated when nemeses from Thianna’s mother’s past surface, and Karn’s life is designated an obstacle by his Machiavellian uncle. Enter: wyverns, a seemingly silent horn, undead assailants, flatulent trolls and one massive dragon. A merging of comedy, action and suspense maintains a promising pace. As present as the lurking danger are two important messages: Focus your energy toward accentuating your strengths rather than regretting weaknesses, and always stand downwind from a troll.

Future fans of Tolkien and George R.R. Martin can happily cut their serial-fantasy teeth on this first book of an eventual series. (map, illustrated guide to the Thrones and Bones game) (Fantasy. 10-14)

That last line especially, huh?
Meanwhile, keep watching www.thronesandbones.com for developments. And any activity on the Goodreads page is always appreciated.

Thank you Charlie. So far people think so. Fingers crossed they're right.