Friday will be the Young Adventurers' Writing Workshop, a day long series of workshops and sessions with all of the authors above. This is a ticketed event, limited to 75 attendees, so sign up now.

Then Saturday and Sunday will be panels and discussions of children's books in two days of kids & kids' lit themed programming. The Saturday and Sunday events are open to all Alamo City Comic Con attendees, so bring your kids or your kids-at-heart and join us for what's going to be an amazing weekend.!

Alamo City Comic Con is held in San Antonio, Texas the weekend of October 28th to the 30th. See their website for ticket and hotel information. Meanwhile, here is their press announcement about Young Adventurers as well as bios for the stellar author guests (though I don't know who that first guy thinks he is). Also worth noting, the great David Liss (The Coffee Trader, Randoms) will be MCing and moderating the Young Adventurers programming! Check it out:


Alamo City Comic Con and Barnes & Noble have partnered up to provide ACCC2016 attendees a whole new and exciting experience: YOUNG ADVENTURERS! Held at the Henry B Gonzalez Convention Center from October 28th-30th, 2016, our Young Adventurers experience focuses on 6 award-winning middle grade authors. Holly Black (The Spiderwick Chronicles series, The Modern Faerie Tale series), Bruce Coville (My Teacher Is An Alien, Unicorn Chronicles series), Lou Anders (Thrones & Bones series), Obert Skye (Leven Thumps series, The Pillage trilogy), Melissa Marr (Wicked Lovely series, The Blackwell Pages series), and Matthew Cody (Supers Of Noble Green trilogy, Will In Scarlet) will be in attendance to meet fans, sign books, and offer children's programming (panels) that is open to all ACCC attendees. SPECIAL LIMITED-SEATING EVENT: On Friday, October 28th, join our special guests and emcee, David Liss (Randoms, The Day of Atonement), to get first-hand knowledge of the ins and outs of creating best selling works. Our in-depth WRITERS WORKSHOP is limited to 75 attendees, so act fast to secure your seat to this unique and informative event geared towards amateur and professional writers alike. For more info, and to stay up to date. Keep up with the Facebook event Page. 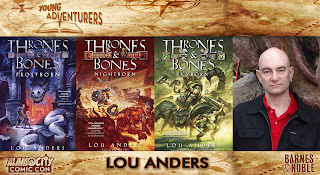 
Lou Anders is the author of Frostborn, Nightborn, and Skyborn, the three books of the Thrones & Bones series of fantasy adventure novels written for boys and girls ages 8 to 80. The first book, Frostborn, has been nominated for the Beehive Book Awards, the Golden Sower Awards, the Young Hoosier Book Awards, and the Pennsylvania Young Reader's Choice Awards. Recently, Anders was named the 2016 Children's Writer-in-Residence at Thurber House in Columbus, Ohio. He is also a Hugo Award winning editor and a Chesley Award winning Art Director. He and his family reside in Birmingham, Alabama. You can visit him online at louanders.com and ThronesandBones.com, on Facebook, Pinterest, Instagram, and Tumblr, and on Twitter at @Louanders 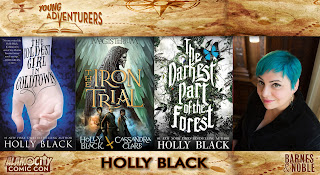 Holly Black:
Holly currently lives in New England with her husband and son in a Tudor cottage with a secret door. There, she enjoys caffeine, reading, and revelry. Holly is the author of bestselling contemporary fantasy books for kids and teens. Some of her titles include The Spiderwick Chronicles (with Tony DiTerlizzi), The Modern Faerie Tale series, the Curse Workers series, Doll Bones, The Coldest Girl in Coldtown, the Magisterium series (with Cassandra Clare) and The Darkest Part of the Forest. She has been a finalist for an Eisner Award, and the recipient of the Andre Norton Award, the Mythopoeic Award and a Newbery Honor. 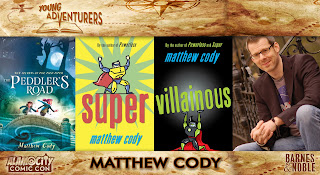 Matthew Cody:
Matthew Cody is the author of several popular books including the award-winning Supers of Noble's Green trilogy: Powerless, Super and Villainous. He is also the author of Will in Scarlet and The Dead Gentleman. His books have appeared on Amazon, Bank Street and the New York Public Library Best Books of the Year lists. He is currently at work on a new trilogy for young readers, The Secrets of the Pied Piper, and book one, The Peddler's Road, is available now from Knopf Books. He lives in Manhattan with his wife and son. 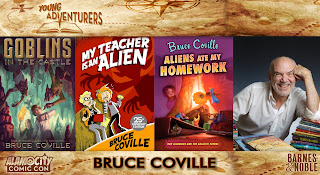 Bruce Coville:
Bruce Coville has published over 100 books for children and young adults, including the international bestseller My Teacher is an Alien, and the Unicorn Chronicles series. His works have appeared in a dozen languages and won children's choice awards in as many states. He is
also the founder of FULL CAST AUDIO, an audiobook publishing company devoted to producing full cast, unabridged recordings of material for family listening. Mr. Coville lives in Syracuse, New York with his wife, illustrator and author Katherine Coville. 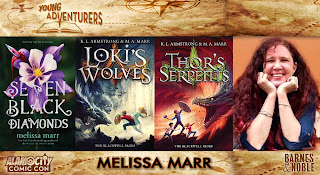 Melissa Marr:
Melissa Marr is the internationally bestselling author of books for teens, children, and adults. Her books include the faery series, Wicked Lovely; a children's Norse mythology series (The Blackwell Pages, co-authored with Kelley Armstrong), Graveminder (dark fantasy), and Bunny Roo (a picture book). Additionally, she has co-edited several fantasy anthologies. Her books have been published in 28 languages and have been bestsellers in numerous countries. Prior to being a writer, Melissa taught university literature, worked an archaeology dig, and worked at a daycare. She is the mother to three children, and most of her books were written for them. 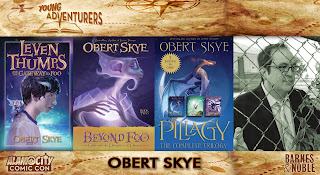 Obert Skye:
Obert Skye is the bestselling author of the Leven Thumps series, the Pillage Trilogy, Witherwood Reform School, and The Creature From My Closet. He can be found at www.obertsky.com