When I was a kid, I loved Corvettes. For one reason and one reason only. They were the closest thing to a Batmobile I'd ever seen. It was a dream of mine to one day own one and put fins on it. But as I got older, that dream was reluctantly recognized for the pipe dream that it was. Or was it? Recently, I've been finding out that there are a great many homemade - or at least custom-made - Batmobiles out there in the world already. Here are just a handful of them.

This lifesized model of the Batmobile from Batman: The Animated Series is amazing. More pics here, although this isn't the website of the builder. 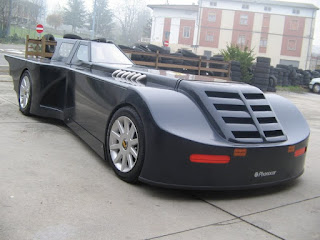 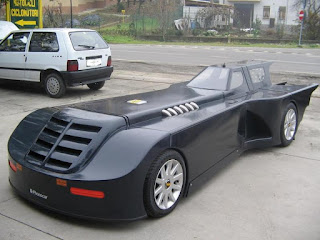 This Batmobile, dubbed Batmobile 2000, from actor, writer, screenwriter, photographer, illustrator and designer Christopher C. Canole, is so impressive that I believe it was mistakenly (?) rumoured to be for one of the films in the Burton-Schumacher era. The link has four pics with front, side and (very impressive) rear views, but since they don't easily download I don't want to step on Mr. Canole's copyright and will just show the pic on the front page. Follow the link above and see all the amazing shots, though, and you won't be disappointed. And Christopher, if you ever stumble across my site - wow!

This 22 foot long Batmobile was built by Oscar Pumpin, who was inspired by Batman Forever, and cost a reported $325,000. Again, plenty more photos at the link. 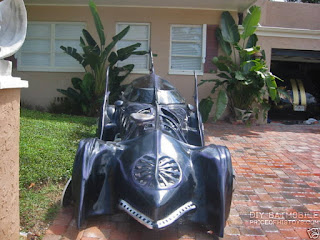 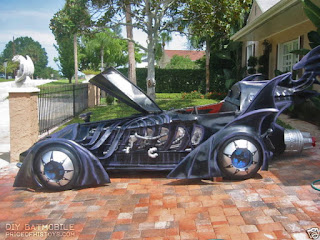 I've blogged before about Willie J. Perry, the Batman of Birmingham, a man who spent all his time dressed up in a costume that resembled Evel Knievel more than the Caped Crusader, driving around in his suped-up 1971 Ford Thunderbird, dubbed the Rescue Ship, helping stranded motorists and being a good samaritan. Willie died when I was just a kid, asphixiated while working under his car in his garage, but he was a real life superhero (and a personal hero of mine). Here is his car: 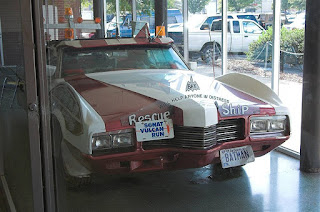 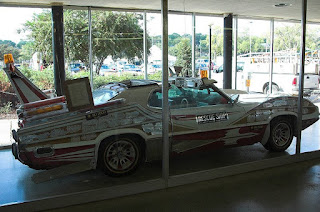 Don't know anything about this homemade Batmobile. I think the concept of it is perhaps a little cooler than the execution, at least around the windshield, but if it were a little less lumpy there it would be cool, and I love the hood/grill. 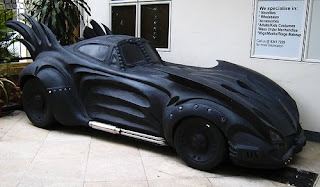 This one not so much: 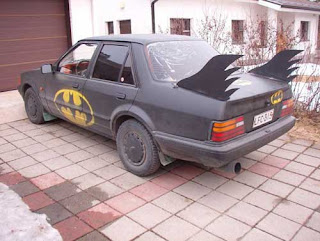 But you've got to love this homemade 1940s Golden Age style Batmobile: 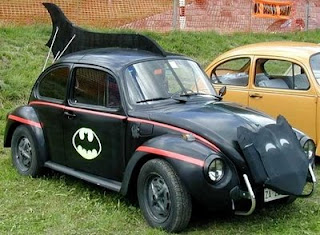 Don't know anything about this one and wish I had a better picture: 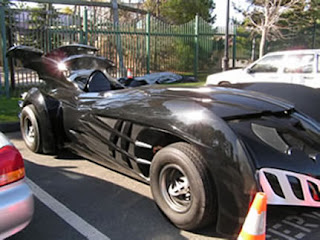 And what's not to love about BMW's latest, cloth-covered, shape-shifting "Batmobile-style" concept car, the Gina, which can change its shape at the touch of a button. Reportedly, "the headlights open like eyes from behind the stretchable fabric, which shifts at speed to make the car more aerodynamic." Wow: 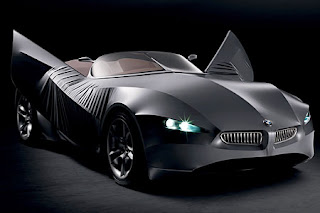 Still, my favorite is hands-down this 1989 Keaton Batmobile Replica, owned by Mark Shields, and built in 1991 by a design team out of none other than a classic 1978 Corvette!!! Yes, a Vette, and the result is somehow more sublte and better looking than the Keaton original. It's apparently for sale for just $50,000, in case any of you are wondering what to get me for Christmas. (Update 1/21/09: Apparently this amazing machine was built by Randy Hecht of Huntington Beach, CA, and purchased by Shields on Sept 2001.) 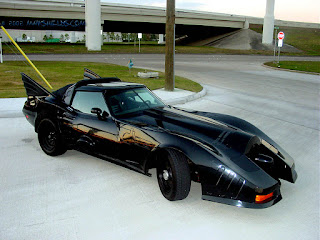 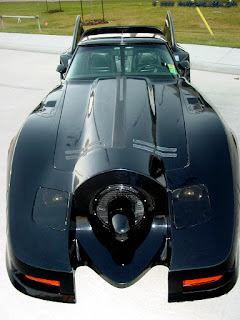 Sweet, huh? And Santa will vouche that I've been very nice this year.

Lou...I'm clearly not alone when it comes to a Batmobile thing. I just bought a fantastically detailed die-cast 60's Batmobile by Elite (really Hotwheels) and they had previously made a very sexy Anton Furst Batmobile under the Hotwheels banner. The life size "animated" Batmobile on yr blog is beautiful...

I have the Hotwheels 1:16 scale "Tumbler" Batmobile from Batman Begins, and I am about to get the 1960s one. I wish I'd gotten the Keaton when I had the chance (I have a smaller model of it, and the whole recent run of comic-book-based Corgi's.)

Fab stuff. If I owned any custom built car it would have to be the Spectrum Patrol Car from Captain Scarlet. No, not the big blue one you had to sit backwards to drive, that would make me ill - the slick red speedster.

I still love you, though, John.

These are so, so awesome. BTW, here's the video for the Gina, where you see the 'eye-opening' effect. It's really impressive.

That video is AWESOME. I want a car than can wink!

My favorite was the batmobile from the old serials which I believe was just a station wagon with a magnetic batman decal slapped on the side.

That one did have the virtue of being easy for fans to reconstruct.'

I loved the scene where they pull into an alley to change clothes in the car.

Those are awesome looking cars! Are they drivable? And are they street legal?

although I think Michael keaton was the best Batman and Jack Nicholson the best joker.

I believe most of them are drivable and some of them street legal. Can't agree with you on Keaton and Nicholson though. I can't even watch that film anymore.

I'm so glad you mentioned Willie Perry! Ben & I went to visit the Rescue Ship at the fairgrounds earlier this year. Sadly, it needs better care than it's getting. Still, it was awesome to see. If you enlarge the second picture, you can see the stickers; what the casual viewer might not be able to tell is that each one bears the name of a woman Perry rescued. AWESOME. Plus, there's an 8-track in there. AN 8-TRACK.

I've got to get out there and see the car. I haven't seen it since I was a kid. He stopped once when a group of us were playing in the yard. He kept saying, "I'm Batman" over and over. Made me wonder why he didn't come up with his own name, as he clearly wasn't. But these days, I'm really honored to have met him. And proud that Birmingham had one of the very few real world superheroes.

It's my daily driver. There's something about 500hp, and advanced suspension and tires that makes you feel glued to the road, that brings a smile every day.

You may never get to be Batman, and zoom out of the batcave, but you sure can get yourself a Vette - you'll never regret it.

Not buying a vet until I can afford to put fins on it.

Regarding the Batmobile Babe Magnet you posted (just above the excellent VW 1940 version conversion) how can you not love the inspired and dedicated effort that went into that classic masterpiece? Sure the guy had limited funds, but that should not be a reason to make disparaging remarks on such a great reproduction of the, um, eh, attempt to, ah, you know, uh...

Okay. You're right. That Batmobile sucks. Glad you liked it enough to post it, and thanks for the link. --Bunk

Hey Bunk! I admit, just the name "Batmobile Babe Magnet" is enough to win my affection. And it's better than my own younger attempts at a Batmobile, which I believe was a cardboard box on a red wagon.

Cool stuff. I can just imagine the look on people's faces seeing one of these cars for the first time.

My name is Randy Hecht of Huntington Beach, CA. I built that Keaton Batmobile that Mark Shields has. He bought it from me in Sept 2001. Would appreciate the architect of this 'street-legal' masterpiece getting the credits. (714)-642-8621
Thank you

Hi Randy,
It is indeed a masterpiece! I'll amend the post, and thank you for stopping by.

That video is AWESOME. I want a car than can wink!
Term papers

Thanks for sharing your article. I really enjoyed it. I put a link to my site to here so other people can read it.

The topic belongs to the high extent of great variety of the cars that are highly related to the marketing.

The Batmobile is Actual Custom Built Life Sized Cars, and I think this is amazing to see that peoples do like batman style cars and the make there own cars in that style which are look so good.

What a cool car;s , Fantastic, they are looking like very costly. But My dream that I got these car. They are totally outstanding for me.

I always learn something new from your post!Great article. I wish I could write so well.

Hi. I wanted to drop you a quick note to express my thanks.

Nice post with awesome points! Can’t wait for the next one.

It’s great to see good information being shared and also to see fresh, creative
ideas that have never been done before.

very nice and impressive one sharing you have done here i like it and would like to appreciate you on this so keep it up.
Apple Laptop

The education provided by Australian institutes is highly valued and recognized globally. There are more than 200, 000 international students who have preferred to Study in Australia