Back from World Fantasy 2008 in Calgary, AB, Canada. The con felt smaller than most, but the hotel, the Hyatt Regency, was wonderful, the bar quite nice, the wait staff really friendly and helpful, and there were enough good restaurants in walking vicinity to provide options, but nothing so wonderful nearby as to pull people away for too long.

So, all the makings of a good con. 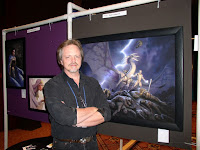 Todd Lockwood was the Artist Guest of Honor. Todd and I have only known each other a year, but in that time, I've really come to dig him as a person (having already digged him as an artist). He brought prints of his work to hang in the show, and the largest by far was the print of the illustration he did for our just-released novel, The Stormcaller

by Tom Lloyd. Seeing as how these were prints (he works digitally) that could be printed at any size, his choice of size for The Stormcaller was especially cool. And seeing it at this size was just magnificent, but getting to spend as much time with Todd as I did was even better. 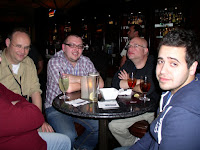 Having the time to spend was a real plus of this convention for me, as I was able to get actual quality facetime with Rani Graff (publisher and chief editor of Israel's Graff Publishing), Alan Beatts (owner of Borderlands Books), Mark Newton and Christian Dunn (of Solaris books), David Anthony Durham (author of Acacia), new author Tim Akers, and a host of people who usually only see me running from one meeting to the next. "Not running" was pretty much the order of my day here, as I went with a determination to have conversations that lasted longer than 5 minutes. The result was that I really enjoyed this convention.

Also good to see Graham Joyce back after skipping a year, and Bill Willingham (of Fables fame), 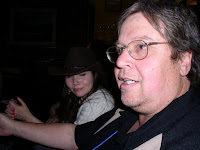 who attended World Con as well and who I hope will keep coming to these. Loved being with Liza Trombi, Diana Gill, Marc Gascoigne, Jeremy Lassen, Jetse De Vries, Kay Kenyon, Louise Marley, Jim Minz, Lee Modesitt, Jude Feldman, Farah Mendlesohn, Jacob Weisman. And meet new friends like Asaf Ashery (who can put a cigarette out on his hand) and the incomparable Daryl Gregory (who writes a mean short story). 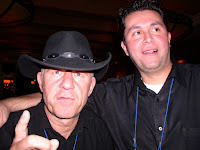 Hats were a weekend long theme. Lots of them being passed around from head to head (including mine, with very mixed results.) The only ones who really pulled it off were Marjorie M. Liu, pictured here above with Bill Willingham and wearing a cowboy hat, Graham Joyce, with John Picacio and the same cowboy hat, and Mark Newton, with this Canadian Mountie hat. 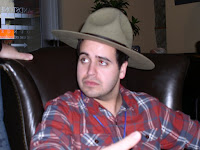 Now, I'm not surprised that Marjorie can make the hat work - I suspect she can make anything work - and Graham really threw himself into the part, desperately trying to sound "western" with lines like "m heya t' fug yu up," - but that anyone can make a Mountie hat work is really an accomplishment! Mark, I am in awe. 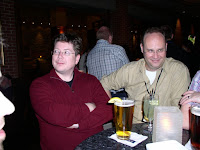 Borderlands Scotch tasting was hands down the best party, even if I stick to beer and wine. Saturday's dinner at the Gypsy Bistro hands down the best meal. And lunch with Marc Gascoigne was great even if the fish and chips weren't. Talking to him at length has me excited to see what he does with Angry Robot. He's pictured here with John Berlyne, associate editor for SFRevu, whose got his own interesting venture upcoming. 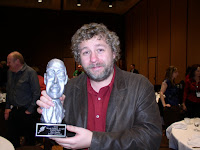 Rob was a nice guy, who seemed a bit overwhelmed by the whole con scene, but I hope he'll become a regular at these things.

And that's it. Or at least that's enough.

Good to get to hang out with this time. Glad I managed to stay out of those photos, though...

Well, I've got one of you and Kay Kenyon I could drop in!

Uh... No, honestly, I'm perfectly happy to but just a name. I've no confidence that I'm likely to have kept my eyes open at the crucial moment...

what do you mean desperately? It was the best Lou Anders impression I'd heard all year. I got so into it I even thought about voting for the other guy. And scared myself.

Brilliant to catch up with you!

Now see there are 52 distinct southern dialects. And none of the ones round these parts wear cowboy hats. But it was wonderful to see you too.

Great seeing you! And Asaf and I rode together on the plane to Chicago.

52 distinct southern dialects! OMG. Can you name them though? (just wondering, not a challenge)

Was told that in the drama department at UVA by a vocal coach who was working with me to help me lose my Brooklyn accent (no foolin'). I can't identify them, but I can recognize a Birmingham accent as distinct from other southern accents. Sometimes a general Georgia one too. But the sort of Texas accent Graham was going for is completely different.

Good to see you again, Lou (and everybody else).

A number of years ago some American asked me: "You got such a funny accent, where you from?"

To which I replied: "Holland."

"Holland, Texas. I knew you was a cowboy."

I can only suppose the gentleman was drunk or otherwise inebriated.

Now, I'd like to have seen you in the hat!

That's funny Jetse. I was at the baseball in St. Louis one time with friends from Alabama, and I was asked by a couple of not too swift if I was from down South.

That cracked the rest of 'em up.

Well, I was born & raised in Los Angeles, California (lived there for 31 years before leaving)and I can't even begin to guess how many times in my life I've been asked by people "what part of New York are you from?"