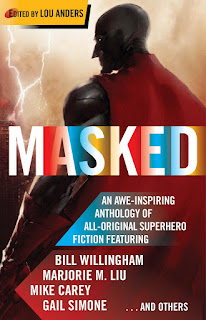 contributor Joseph Mallozzi talks about his story, "Downfall," on his blog this morning. Here's a taste:

"On average, it takes me about a month to write a script, from pitch to finished draft.  This short story took me about ten times as long as I wrote and endlessly rewrote what I had (and at approximately forty pages, I had a lot!).  Yes, only ten months to write a short story.  I say “only” because, if Lou hadn’t needed it for publication purposes, I’d no doubt still be rewriting it."

Joe will be hosting mini-discussions with several more Masked contributors leading up to a big week of September 12th discussion of the title.

Meanwhile, I'm currently pondering this quote I read yesterday from Alan Moore on his current attitude to spandex:

"I’m interested in the superhero in real life, but not the comic book version. I’ve had some distancing thoughts about them recently. I’ve come to the conclusion that what superheroes might be — in their current incarnation, at least — is a symbol of American reluctance to involve themselves in any kind of conflict without massive tactical superiority. I think this is the same whether you have the advantage of carpet bombing from altitude or if you come from the planet Krypton as a baby and have increased powers in Earth’s lower gravity. That’s not what superheroes meant to me when I was a kid. To me, they represented a wellspring of the imagination. Superman had a dog in a cape! He had a city in a bottle! It was wonderful stuff for a seven-year-old boy to think about. But I suspect that a lot of superheroes now are basically about the unfair fight. You know: people wouldn’t bully me if I could turn into the Hulk."
I can think of several stories in Masked that address this possibility head on.

Ben is reading Masked right now, and he keeps taunting me by laughing mysteriously. Sometimes by reading bits aloud.

(I did cheat and go ahead & read "Where Their Worm Dieth Not," just because the excerpts Ben read to me were so great, and wow, that story was fantastic & unexpected.) Can't wait for my turn with the rest.

I think Alan Moore's comment might have more to do with who the big two have writing their comics than anything else. I've stopped reading anything with the names 'Millar', 'Morrison' or 'Ennis' on the spine.
The spirit is still alive but you'll only find it in creator-owned comics like Invincible, Fables and Astro City.

I have a hard time reading or listening to anything Alan Moore says these days because when he talks about comics everything is colored by his bitterness and resentment toward the "big two". I love his work but listening to him talk is like being forced to listen to Old Man Withers down the street telling the neighborhood kids to get off his lawn.

Good comments all. I don't agree with Moore's comment so much as I found it interesting that he was saying it. I think it *can* be as he describes, but a lot of the good stuff I'm reading actually examines this undercurrent rather than celebrates it.