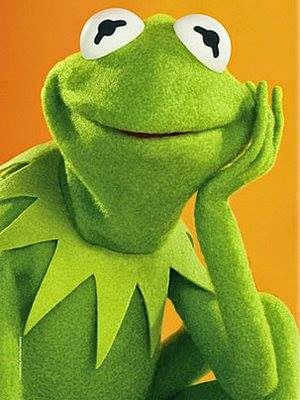 Have you been half asleep?
And have you heard voices?
I've heard them calling my name
Is this the sweet sound
That called the young sailors?
The voice might be one and the same
I've heard it too many times to ignore it
It's something that I'm supposed to be
-from "The Rainbow Connection"

I think a lot about Kermit the Frog.

He left his swamp in Louisiana to pursue a dream of entertaining people and traveled all the way to Los Angeles.

Somewhere along the way, it became less about his own dreams and more about facilitating others' dreams, about accruing and enabling a group of like-minded individuals to reach their own potential.

I find that really interesting. Also, his character is very complex for a frog.

Kermit is long-suffering, but he can fly off the handle when he's had enough. He has wrestled with depression and self doubt throughout his career, but he also finds the strength to carry on by returning to what drove him initially.

I was upset when he moved even further into the background as the producer, but not the host, of the short lived Muppets Tonight. And in the majority of Muppet films from The Muppet Christmas Carol

on, he was marginalized in his own movies, taking only minor, supporting parts.

It thrilled me to see him take the leading man role in Muppets Most Wanted,

even if he graciously allowed another frog actor to play the part of Constantine, his villainous twin, and I hope that this means, after years of working tirelessly behind the scenes, Kermit has decided to return to that initial dream that drew him out of his swamp to begin with.

Parallel career paths. It's not easy being green.