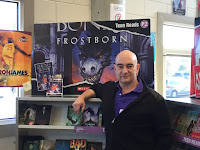 This week was an incredibly fulfilling but Herculean tour of three schools in three days, across which I spoke to a total of approximately 2, 193 sixth to eight grade students about my Thrones & Bones series.

On Tuesday, I visited Liberty Park Middle School in Vestavia Hills, Alabama. My visit started off by speaking to all 470 students in their gymnasium. After this, I went to their library to sign books at their Scholastic Book Fair. It was tremendous to once again see the awesome sign that Scholastic has made for their edition of Frostborn, the first time I've seen the sign in action (as when I saw it last that school's fair had already 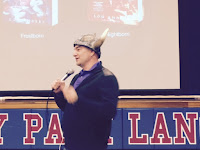 ended). Then I had a bit of a break, during which I lunched with the teachers and talked about all things geeky. After lunch, I conducted a writing workshop in the LPMS Library for a small group of students who were all up and coming storytellers. The whole day was very nice. The students and teachers were great. I was very impressed by the students' questions after my book presentation, and I'm sure I've met the next generation of talented authors who will one day give the rest of us a run for our money. Thanks to everyone at Liberty Park, especially Librarian Jean Deal and Assistant Principal, Roger Dobnikar. 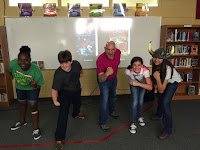 On Wednesday, I spoke to 523 students at Riverchase Middle School in Birmingham, Alabama, divided into five separate groups, with a book signing after each presentation. This was a day long undertaking, with books on hand courtesy of Little Professor Book Center.  The most talking I've ever done in one day before was four back-to-back sessions and that left me exhausted, but I've got a lot more experience presenting to schools since that time and this was both a blast and a breeze. The kids were great and had fantastic

questions. Highlights were being asked "Are you a feminist?" (after I described my reasons for writing Thianna the way I did) and meeting a girl who introduced herself as "the shortest person in my school" who said she felt an instant kinship with my half-sized giant character. Thank you to Librarian Kathy Collins, and all the teachers and students, for a wonderful day. 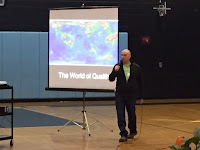 Yesterday, I returned to Berry Middle School. I'd visited them during their Fall Scholastic Book Fair in September, but I came back to speak to all 1,200 students in there gymnasium across three sessions of 400 each. I did all three presentations back to back, speaking to the sixth, seventh, and eight grades separately. Once again, great questions from the kids and their enthusiasm was just tremendous. One girl is obviously the Berry Middle School resident expert on mythology and fantasy, as she answered four of my questions in a row! Finally, we ended 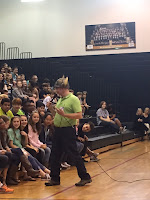 midday with a lunch with a student, several teachers, Media Specialist Ginger M. Hewitt, and Principal Dr. Chris Robbins.  Thank you to Ginger Hewitt, Dr. Robbins, and everyone at Berry for another great visit. (And to The Heavenly Donut Co.! Mmmm!)

Talking with students about the world of my books has got to rank up there as one of the most fun things I've ever done. I'm grateful to everyone at Liberty Park, Riverchase, and Berry for such a fantastic week!

Next week is three more schools on the Nightborn tour. I'll be back with another report then.