made its second appearance on Stargate: Atlantis last night, in the episode "First Contact." This one is a much better cover-shot than in the previous episode. Thanks to John-Mark for the screenshot, who has several more posted on his blog. Thanks also to Joe Mallozzi and the rest of the Stargate team for arranging this. 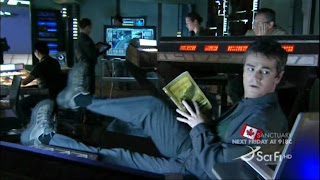 Loved it. Chuck is SGA's renaissance man. Thanks Mr. Anders, and to Joe Mallozzi, for adding another nuance to Chuck's character. Best wishes, Morjana

Thanks to John-Mark for the screenshot...

I feel like an idiot. I tried to figure out what book Colonel Sheppard was reading in his bunk. Rewound the DVR 3 times!

I lose at obvious things.