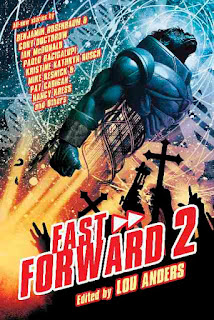 Email ThisBlogThis!Share to TwitterShare to FacebookShare to Pinterest
Labels: Best of 2008, Fast Forward 2

Thanks John. I'm honored to have made the list at all, but blown away to be at #1. This is really down to my contributors though - two of whom, I was psyched to see, also had novels make the Top Five as well.

That's fantastic! Congratulations to you and all the authors.

Especially the authors! And thank you!

But - best of all - another Infoquake/Multireal novel, due when??? And art by Martiniere again?

m-u-s-t stay away from my whipped sweet potatoes dish . . .

Once again, Congratulations to you! It's really nice to see that hard work does pay off. Happy New Year!

Christine, Nick - thank you both.
Christine - Geosynchron, book three in the Jump 225 trilogy, will be published Feb 2010.

"You bring yourself to a book, after all; every book is collaborative."

(Obviously, both for you and all the contributors.)