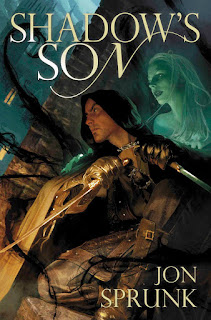 feels solid, with characters who come into their stride, uncover past misdeeds and surprise themselves with what they're able to accomplish.” The Speculative Fiction Examiner, Examiner.com, May 5, 2010

“When Sprunk gets going, he writes with an energy that has to be experienced to be believed. [He] knows that if your main character is up against a wall and facing ten swordsman then the resulting fight for your life can’t be written at anything other than a break neck pace. Not only does Sprunk more than deliver on this score but he remains in control of his writing the whole time. Shadow's Son

will have me coming back for a sequel… Sprunk’s eye for spectacle means that if Shadow’s Son was ever made into a film I’d definitely be there to watch it… a thoroughly entertaining read that had me wondering if perhaps all assassin stories aren’t the same after all…” Graeme’s Fantasy Book Review, May 20, 2010

had me up late at night as nearly every chapter ended in climax after climax of tight action sequences to see how Caim will get out of the next scrape. I give Shadow's Son

7.5 out of 10 hats. Even though this is the first in a trilogy Sprunk does an admirable job at having a clear culmination to most of what he started while leaving plenty left open for the next volumes as things escalate. Sprunk shows loads of promise as he hones his craft.” The Mad Hatter’s Bookshelf and Book Review, May 23, 2010