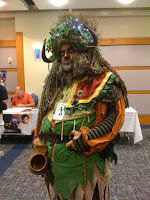 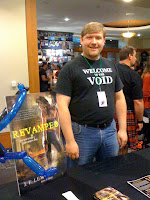 Last weekend I was a guest of Imagicon 2, held May 21-23rd at the McWane Science Center in Birmingham, AL. Timothy Zahn and Larry Elmore were the guests of honor, and they had guests that ranged from John Ringo and JF Lewis to Buck Rogers' Erin Gray and Gil Gerard. 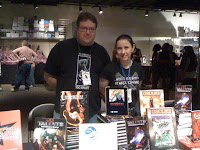 The con was small but enthusiastic. The paper reported 1,300 attendees but I would have put it at a fourth that from what I actually saw. Still, they split the anime track off to another location, and the McWane Science Center is a four floor complex that the convention was threaded throughout, so it was very hard to get a clear fix on who was where when. The location also probably brought in some traffic that came for the center itself, and all the exhibits - robots, tornadoes in a tube, etc...  - made for an interesting backdrop to the events. Plus, the IMAX theater there ran Star Trek just for the weekend.

As with all conventions, it is the people that make or break it, and this weekend was great to hang with friends JF Lewis, author of  Staked

and Revamped, and Shane and Rachel Ivey of Arc Dream Publishing. It was also wonderful to hang with the Inner Worlds Book Club. I'd like to see Birmingham with an annual convention, so I hope this event will return and grow year after year. 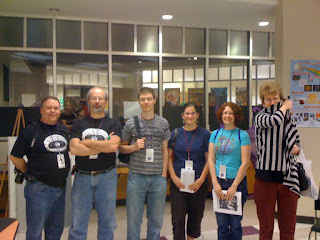 Email ThisBlogThis!Share to TwitterShare to FacebookShare to Pinterest
Labels: Imagicon

Meeting Timothy Zahn would be awesome.

And is Erin Gray still hot?

Tim very nice. I met him in Portland at OryCon and really enjoyed talking with him both times. And yes.

Getting a gauge on the attendance was tough. I did a double-take at the paper's 1300 figure. If true, IC stayed even with last year. The after-action thread on their board is interesting.

Those behind the scenes seem positive about ImagiCon 2011, but the dust from this year hasn't settled yet, so who knows? In any case, I enjoyed myself this year, particularly at your panels and the Sunday morning one with Zahn, Stephanie Osborn, and Doc Taylor, as well as getting a formal intro to J. F. Lewis. With luck, ImagiCon will be around for many years to come.

I hope so. Birmingham needs it. It does have to be a bit bigger for me to recommend it to anyone out of state though.

I wish I hadn't had to work that weekend so I could have gone!
>:/