Behind the Mask: The Evolution of a Super Cover

. Over on his blog, he posts several interesting cover concepts that were explored before artist Trevor Hairsine was brought in, as well as type treatments after he was. (Note that Masked was originally titled With Great Power). 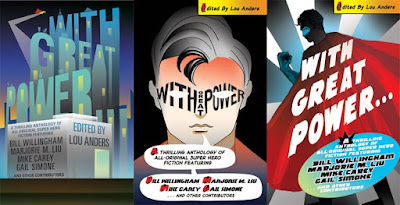 Interesting designs. I like the concept behind the first two, the cityscape and the headshot, though I think both would've needed a lot more refining to work. It would've been interesting to see what the headshot might have looked like with the new title in place (though perhaps that would've been too obvious).

I also think it was good to get rid of the more commonly associated comic book fonts and balloons. They're hard to do right in comics to begin with, they're rarely done well outside of it since a lot of art directors outside the industry don't get it.

Thanks for the behind the scenes.

Thanks, Christian.
Yeah, one of my notes early on (though I didn't see anything from Gallery before Trevor's pencil sketches) was to always dial back the 60s camp.