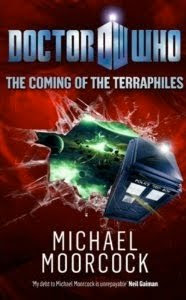 I'm talking, of course, abot Michael Moorcock's Doctor Who: The Coming of the Terraphiles

. I've known about it for a while of course, but the description comes via SF Signal:


Miggea - a world on the very edge of reality. The cusp between this universe and the next. A point where space-time has worn thin, and is in danger of collapsing. And the venue for the grand finals of the competition to win the fabled Arrow of Law. The Doctor and Amy have joined the Terraphiles - a group obsessed with all aspects of Earth's history, and dedicated to re-enacting ancient sporting events. They are determined to win the Arrow. But just getting to Miggea proves tricky. Reality is collapsing, ships are disappearing, and Captain Cornelius and his pirates are looking for easy pickings. Even when they arrive, the Doctor and Amy's troubles won't be over. They have to find out who is so desperate to get the Arrow of Law that they will kill for it. And uncover the traitor on their own team. And win the contest fair and square. And, of course, they need to save the universe from total destruction.

Email ThisBlogThis!Share to TwitterShare to FacebookShare to Pinterest
Labels: Doctor Who, Michael Moorcock

You can never have enough Elric.

I was very pleased to find this site.I wanted to thank you for this great read!! I definitely enjoying every little bit of it and I have you bookmarked to check out new stuff you post.
.