Frostborn: "a natural 'what to read next' for Percy Jackson fans." 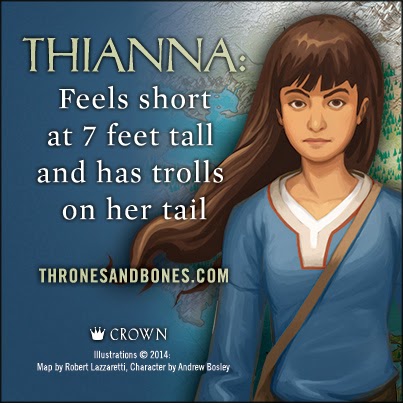 Another great review for Frostborn,

this one at KateOnKidsBooks. Careful, though: the first paragraph is a very heavy spoiler for the entire book, start to finish. After that, however, Kate is both generous in her praise and insightful in her comments. She writes:


"Thanks to the popularity of the Percy Jackson books, mythology based fiction has exploded. Thrones and Bones is a natural 'what to read next' for Percy Jackson fans. Anders chooses to explore the world of the ancient Vikings. The book is true to its time and setting. I felt magically transported to this world; I could practically feel the cold air as I was reading. The characters were both well developed and distinctive. It was great having both a boy and a girl, making the book an accessible read for both. As more and more of America's children are multiracial, I love that Thianna is part giant/part human. She eventually embraces the gifts of both of her heritages and overcomes the prejudice hurled at her from an ignorant few. The game Thrones and Bones is somewhat of a cross between chess and Dungeons and Dragons and Anders offers the rules in the back of the book. The title of the series led me to believe the story would be a Game of Thrones rip-off for kids. It isn't, but I'm sure the series title was intentional to give the book some instant recognition. Vikings are brave, magical and very interesting. More readable for young people than Nancy Farmer's Sea of Trolls (my favorite Viking fantasy) this book will find an audience. This is not an easy read, but will be enjoyed by smart kids who enjoy mythological fantasy."