Yesterday, I was the guest speaker at Wilkerson Middle School's Dream Big Read! brought about by the Birmingham American Federation of Teachers with books donated from First Book. The morning event was designed to celebrate the joy of reading--a very important thing--but I almost didn't make it. Last Sunday, I came down with a horrible case of the flu, and while I apologetically tried to bow out, the organizers begged me to come anyway--even if only for a quick 15 minute appearance. I didn't want to let people down, so despite reservations and ill-health, I agreed. 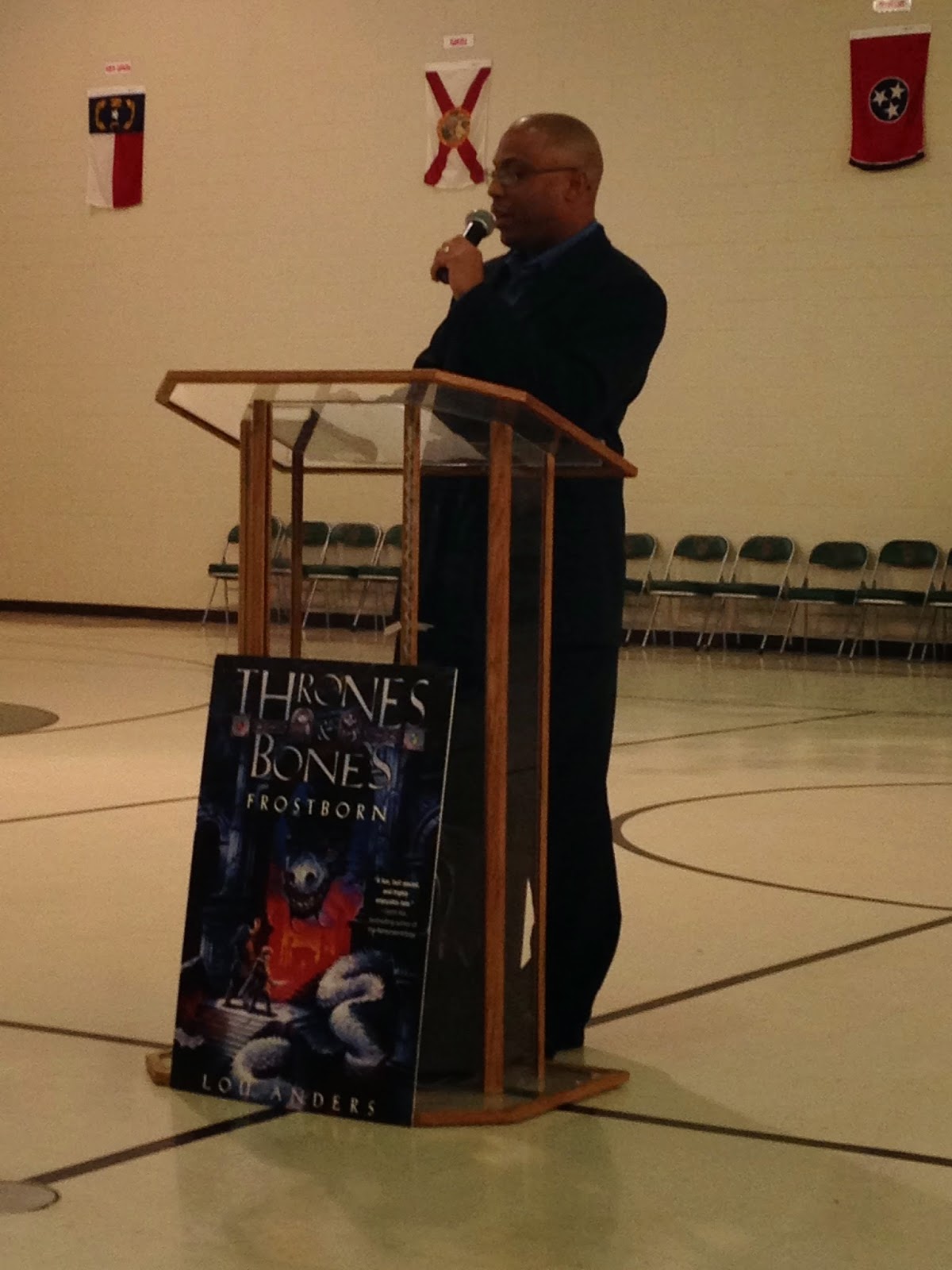 Birmingham AFT President Richard Franklin introduced the Dream Big Read! event by telling the students that they had been selected for this program because they scored the best in their category, not just in Birmingham, but in the state. As I understand it, Wilkerson has repeatedly been named a Torchbearer school. This is a special honor, as Torchbearer schools must meet a host of demanding state and federal criteria, and, despite coming from a high poverty area of the city and dealing with the related disadvantages, the amazing students of Wilkerson have managed to beat the statistics and perform marvelously on state and national tests. Franklin's speech was on the importance of reading, not only on your own, but also with your family. 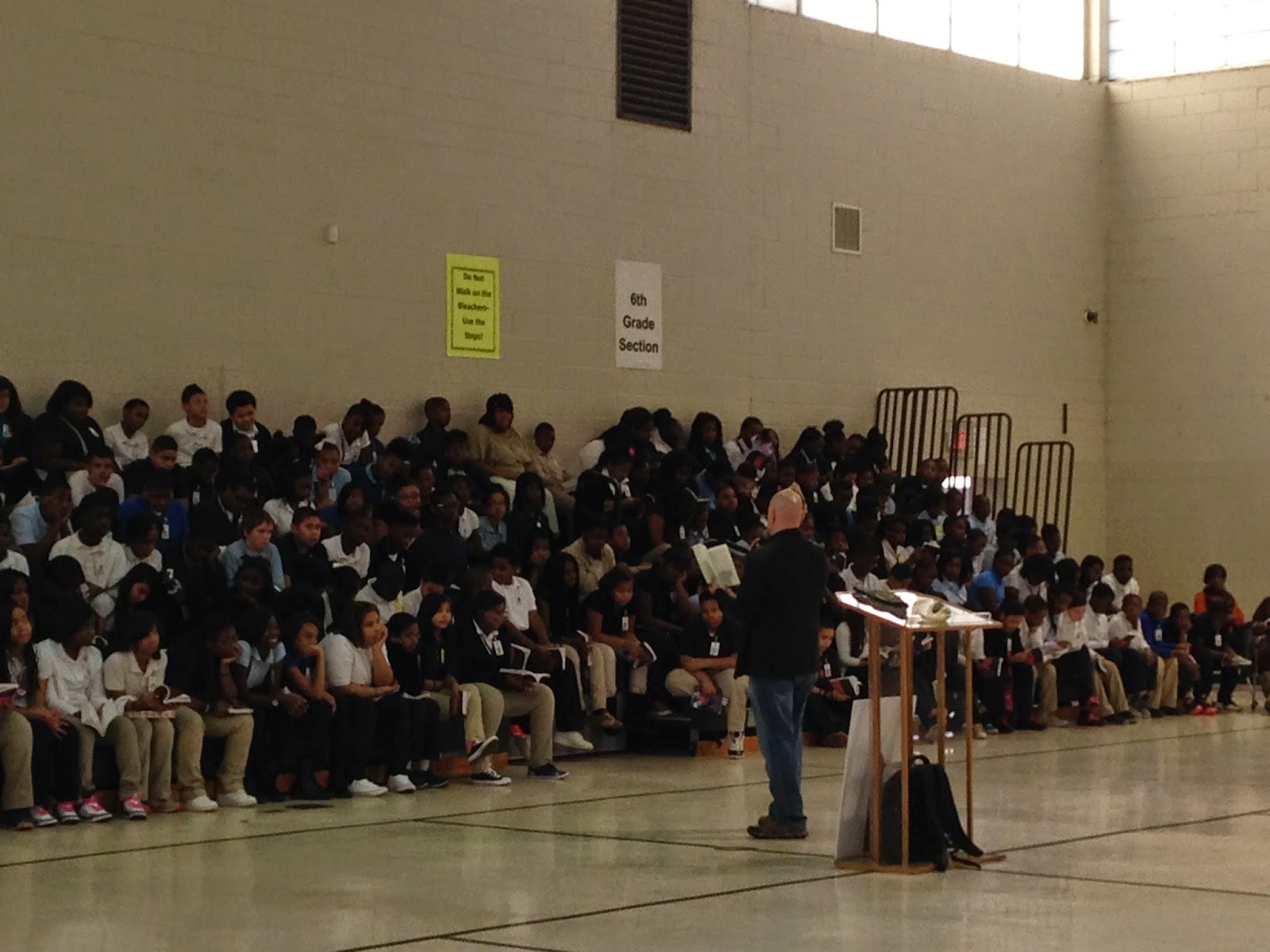 Through First Book, the kids--slightly over 300 students--were given book bags that contained a Percy Jackson hardcover, a Spider-Man book, an Avengers book, some others... But my own publisher Random House Children's Books, when they learned last week of my visit, kindly donated 300+ copies of the Frostborn

arc, which they rushed to the school so that the students could begin reading ahead of my trip.

The result was that when I walked to the podium, I saw that every one of the students in the audience was holding the Frostborn arc! I had been nervous, because this is the first talk I've given without my Powerpoint presentation and the aid of all the fabulous artwork it contains in support of the Thrones & Bones series, so having an already-receptive audience helped overcome the lack of pictures. But I needn't have worried. The students were great -- really enthusiastic, fun, polite, and as bright as I'd heard. About a third of them had already begun reading the book too! Far from doing just the minimal 15 minutes, I went a good 30-40 minutes and the organizers even had to cut our Q&A off with a lot of hands still in the air when I ran out the clock. 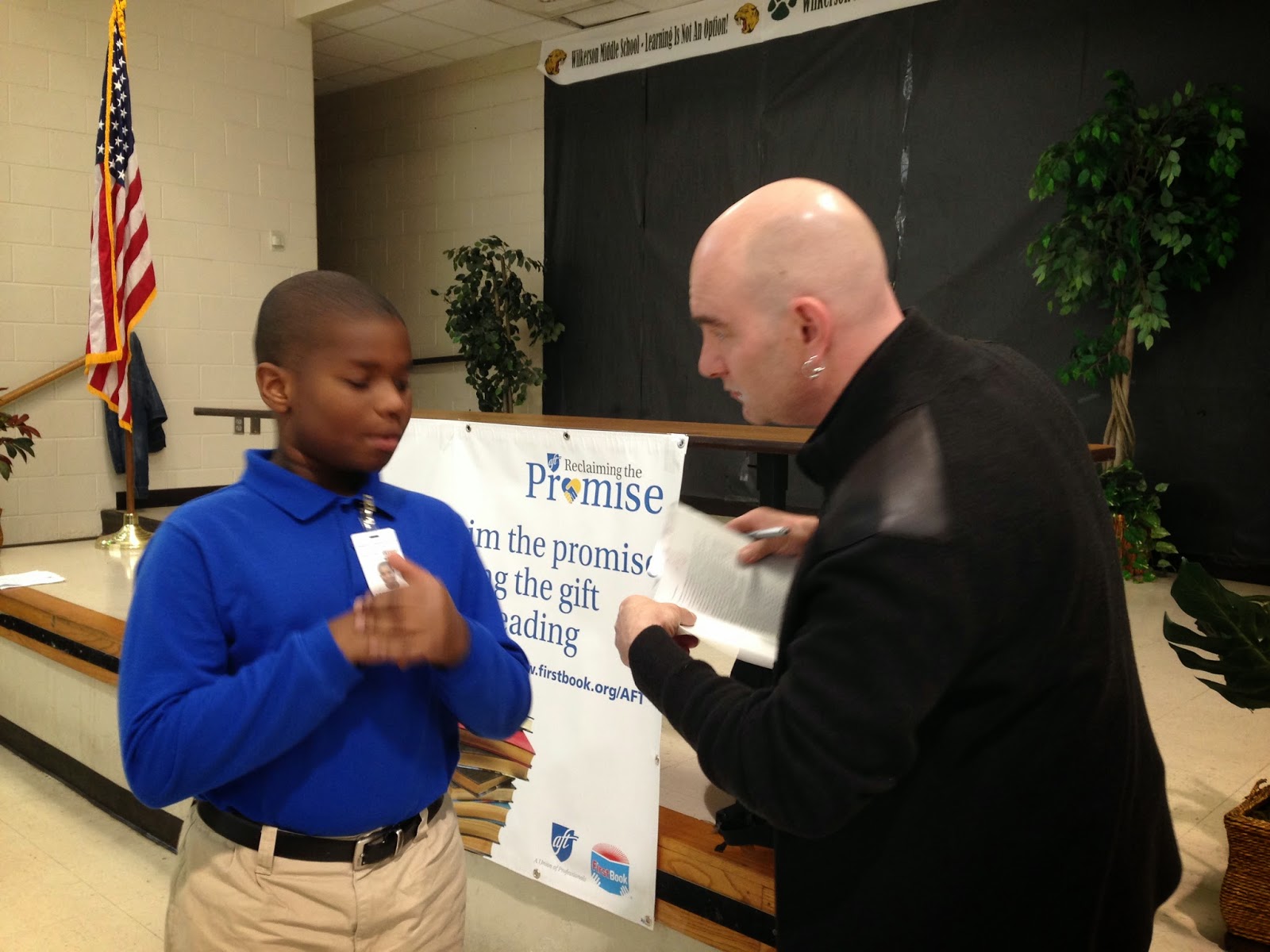 Afterwards, a few kids asked me to sign their arcs, and when others saw I would do this, well, the teachers had to quickly organize a line. I signed most of 300 arcs, which was wonderful because I got another point of connection with Wilkerson's great students. A pleasure to meet them all. I hope they enjoyed the day as much as I did. 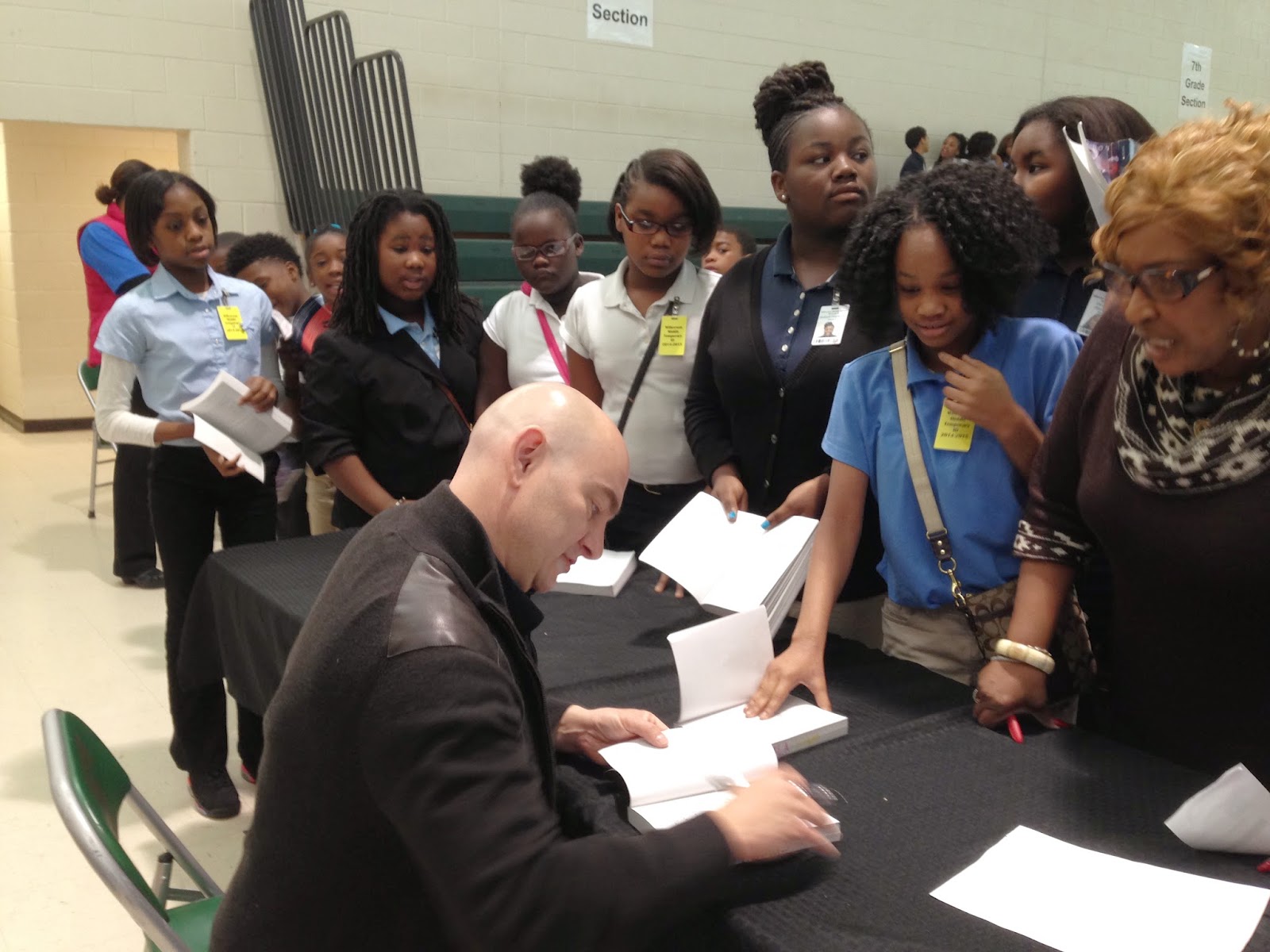 I drove out on a rush of adrenaline. Which carried me through about lunchtime. After which, I was stupidly useless for the rest of the day! But I'm very glad I made the trip.

Many thanks to Terri Michal from Birmingham AFT, Birmingham AFT President Richard Franklin, and Wilkerson principal Ms. Trarsha L. Maddox, as well as the staff, students, and teachers of Wilkerson. 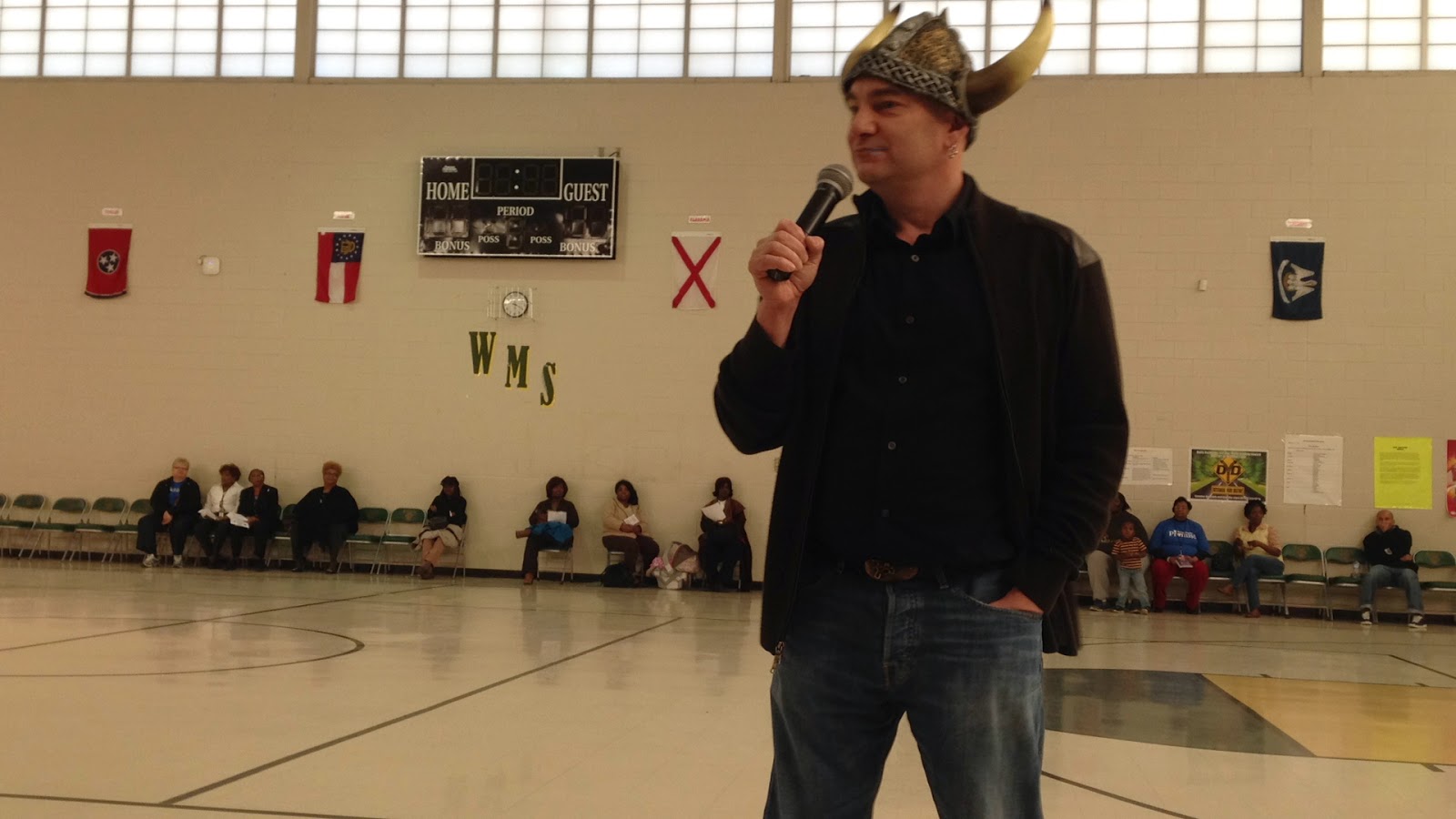