Reflections from the Road: FaerieCon 2015

This past weekend, I was excited to be a guest at my first ever FaerieCon, where I joined such fabulous authors as Melissa Marr, Holly Black, Kami Garcia, and Kelley Armstrong. FaerieCon is a faerie/celtic themed event with a strong emphasis on music. The internationally famous  German band Faun appear every year, as well as bands like the marvelous Woodland. This year's FaerieCon had a Norse sub theme (explaining my appearance there), and featured a performance by Einar Selvik of Wardruna, the Norwegian band who play on traditional Norse instruments and whose music has been featured on the TV series Vikings. 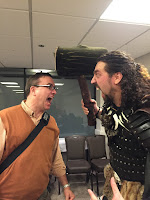 After an early morning flight Friday morning, I arrived just in time to make a panel with Melissa Marr, Holly Black, and Kami Garcia ostensibly about the Faerie Marketplace, though it turned into more of a writing instruction panel. After which a friend I haven't seen since I was in college drove up to hang and found himself dragged to an Author's Tea where fans and authors gathered to sample tea and eat cookies, and he was nearly smashed by Wotan the Faerie Smasher. Then it was goodbye to my old friend and hello to four new ones, with a fabulous dinner with the three aforementioned authors and Kelley Armstrong. And after dinner Scotch. 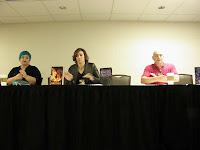 Afterwards, I ended up giving an impromptu two-hour session of my ScripTips course to several interested parties in the bar, and then more Scotch, and then wine in a suite where the various band members were hanging out. And then suddenly it was 4:30 am.

Sunday yet another college friend drove up from DC to meet me for breakfast. Then I had my final signing and I'm happy to say we sold out of Frostborn and nearly of Nightborn! By this point, enough people had heard about ScripTips that I volunteered another session (in exchange for coffee and beer, which is considerably cheaper than my usual fee) and I taught another two hours to a group of about eight to ten people (who were very smart and very fun to teach). 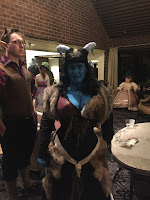 The evening ended with an acoustic show, in which various members of Faun and Woodland played, bracketing a solo performance by Einar Selvik that was transcendent for this Norse-enthusiast.

And there ended a fantastic weekend!

Thanks to organizer Robert Gould, all the other authors, my two old college buddies, the tireless booksellers and convention staff, the Hunt Valley Inn, my drivers Cybele and Kim, all the musicians, and Wotan the Faerie Smasher for an unforgettable time.