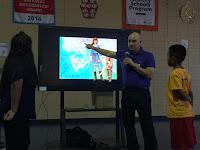 On Tuesday, November 10th, I visited Fultondale Elementary School in Fultondale, Alabama during their Scholastic Book Fair. The moment I walked through the door, I was impressed by the library. It's a huge, bright space, dead center of the school, adorned with beautiful white columns and glass bricks. Nice! 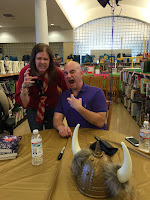 I presented after lunch to the entire fourth and fifth grades, who were a very enthusiastic bunch (with a high percentage of Skyrim players in attendance. Fus Ro Dah!). Then I signed in the library for those who had bought books. The kids were great -- one boy said he was so excited he was going to faint. Fortunately, he didn't. But they were all very enthusiastic about Frostborn and it was great fun meeting them!

Thanks very much to Librarian Laurie Purser for arranging such a great visit! And for asking me to sign a Viking helmet!

And a huge thank you to Fultondale Elementary for giving me a place on the Wall of Visiting Authors! 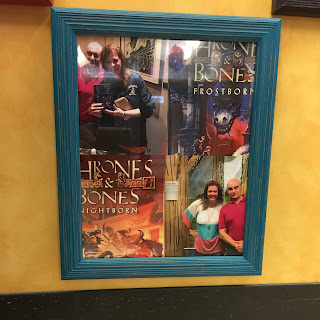