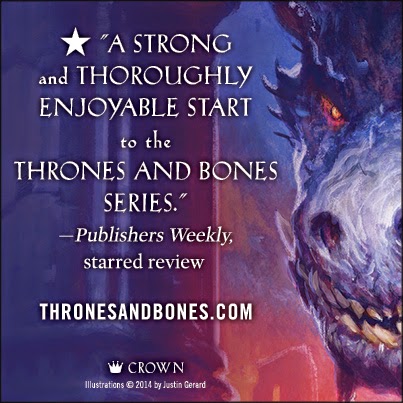 
Frostborn by Lou Anders (Crown) - In this Norse-flavored adventure, Anders pits a clever boy and a resourceful half-giant girl against numerous enemies and the hazards of the frozen wilderness. Twelve-year-old Karn has no desire to learn the family business of farming; he’s much more interested in playing the strategy board game Thrones and Bones. Thianna’s human ancestry makes her an oddity and object of derision among her full-blooded giant peers. Nevertheless, Karn and Thianna become reluctant allies and friends when trouble threatens: Karn runs afoul of a malevolent undead lord, while Thianna must flee from her human mother’s people, who seek a long-lost artifact. Though a lot of elements are in play, Anders ties the novel’s threads together in a neatly satisfying way, crafting a powerful, fast-paced tale.

And second, Amazon has picked Frostborn as one of only four Best Books of the Month: Ages 9-12 (Middle Grade)!

You might be eligible to receive a $1,000 Amazon Gift Card.