Today, Sit.Write.Bleed posts a review of Frostborn (Thrones and Bones).

I'm very gratified by the 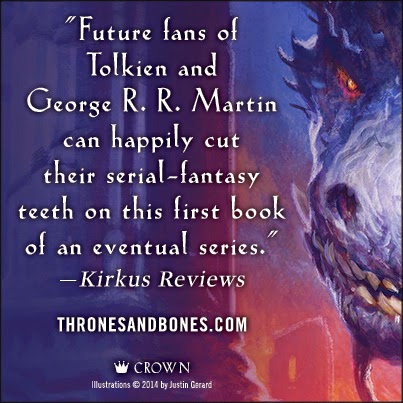 words, which, though not without criticism, say:


This isn't my Hobbit, but after reading it twice through, I am almost certain it would have been if I was eleven in 2014. Anders has crafted a tale filled with ages-old themes and lessons that I think are often missing from a lot of today's fantasy, be it Middle-Grade or Adult. Friendship, Courage, Intelligence, and Trust--these are things that are often assumed to be in the background of every children's novel, but rarely are they talked about openly and pursued passionately, let alone done well. I believe this to be a major reason why I dislike Rick Riordan's Percy Jackson series so much--when it is done out in the open it is too campy to my taste, and when it hidden in the background I just don't care. Anders falls more in with JK Rowling and Lloyd Alexander, so much so with the latter that I almost felt like I was reading The Book of Three (another classic everyone should read.) To put a point on it, I was taken on a great adventure and learned something.

Meanwhile, I'm interviewed on Adventures in SciFi Publishing. I used to be a frequent guest of the show, though haven't been on since host/founder Shaun Farrell stepped away. Now Shaun has returned (yay!) and I join him, Moses Siregar, and Brent Bowen for a discussion of: